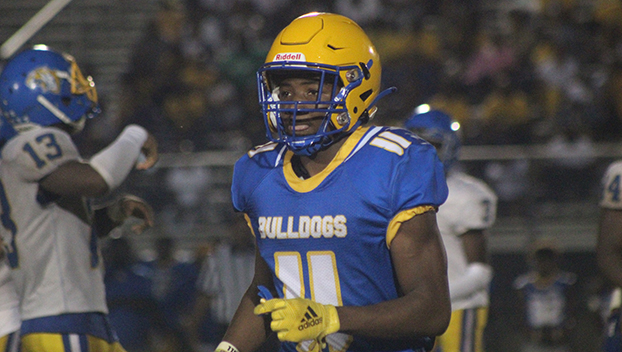 Natchez wide receiver and senior Damarrco Blanton is on the recruiting radar for Memphis, Ole Miss and other schools. He recently visited Memphis and will be at the Ole Miss’s game against Kentucky on a visit this weekend. (Hunter Cloud | The Daily Leader)

NATCHEZ — Wide Receiver and senior Damarrco Blanton is fresh off a visit to Memphis University last week and looking ahead to a visit at Ole Miss this weekend.

Since he was a young boy, Blanton has played basketball, baseball and football. He first loved basketball but as he grew older he began playing football more.

Blanton’s father, Paul Perry said Blanton’s football ability exceeds all other sports. Terry has coached Blanton since he played on the Natchez Falcons and now watches him play on Friday nights.

“I’m proud of him. He has some college offers. This upcoming weekend I’ll take him to Ole Miss. He has good grades too. He is one of a kind,” Perry said. “Last weekend he went to Memphis. When they get there they meet with the coaches and they meet some of the players on the team. They tour the facilities and walk around and tour the locker rooms. They go out to the football fields and meet the coaches.  They meet with the current players.  When game time comes they get to be on the sidelines and watch them warm up. They go to a certain part of the stands and watch the game. It is an exciting experience.”

This year Blanton has made big plays for Natchez including a 60-yard punt return for a touchdown against Wilkinson County. In a game against Jefferson County, he made a diving catch in the back of the endzone to score the winning touchdown.

It was a play his father has seen Blanton make many times. Perry said last year Blanton caught 39 of the 41 passes thrown to him. According to MaxPreps, Blanton averaged 34.1 yards per kick return in 2021. Blanton has speed and playmaking ability like Percy Harvin, played at Florida from  2006 to 2008, or Joe Adams, played at Arkansas from 2008 to 2011.

Natchez head coach Steven Davis said Blanton, Mike Williams and Traylon Minor, all seniors, have worked hard all season and given their entire effort on the field. Blanton said after their opening night win over Wilkinson County that the new head coach is changing the culture and he bought in.

“He has changed it all and is big on discipline,” he said. “I love Coach Davis. We have to do everything at a fast tempo. That is why he has us run at practices so we won’t be tired for games.”