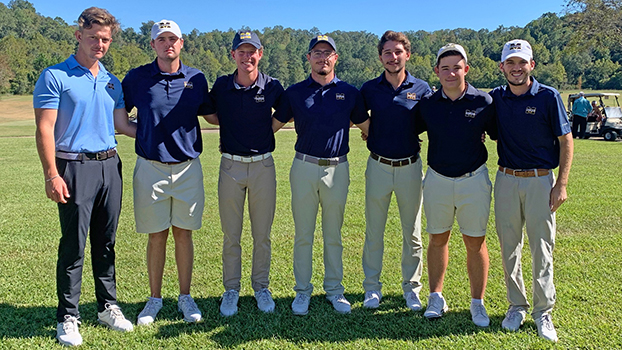 Chase Kasier, far right, finished second as the Mississippi Gulf Coast Community College golf team won the Co-Lin invitational in Natchez. Kaiser is a Cathedral alumn and the tournament was played on his home course at Beau Pre. (MGCCC Athletics)

On the day Mississippi Gulf Coast dropped two places in the coaches poll, the Bulldogs took care of business and won their second straight tournament to start the year. They did it with a 1-2 finish by roommates atop the individual leaderboard, too.

Now-No. 9 Gulf Coast shot 3-over Friday at the Copiah-Lincoln Fall Invitational at Beau Pre’ County Club in Natchez to win going away over now-No. 6 Meridian. The Bulldogs won by 18 shots after going nine lower than the Eagles.

“We played a little bit better today,” Gulf Coast coach Brad Thornton said. “We were able to finish things out, which is what we wanted to accomplish. We wanted to make sure we stayed in the moment and make sure we won the day itself and not just focus on holding a lead. We wanted to extend it, which we did, so I’m very proud of them.”

Will Burnham (Fr., Jackson/Jackson Prep) held off a second-round charge by Chase Kaiser (So., Natchez/Cathedral) to take medalist honors. They were the only golfers to shoot under-par rounds during the tournament. Burnham shot 1-under 71 on Friday to edge Kaiser’s 70.

“He’s my roommate, and we’re pretty much best friends,” Burnham said. “It was fun knowing where we were at. We had a good time out there.”

He needed a 6-footer on his final hole to clinch the win. Thornton said he was consistent through both rounds and never got out of position on the course. Burnham said he realized par wasn’t going to be a bad score on most of the holes.

They were the only two Bulldogs to make the All-Tournament Team, but Jackson Wise (Fr., Pontotoc/North Pontotoc) shot 74 to move up 11 place and tie for 15th. Alessio Graziani (So., Johannesburg, South Africa/Beaulieu College) was the other card that counted with a 76.

After eating burgers at Kaiser’s Natchez home, the Bulldogs packed up the van to head north to Allendale, Mich. They’ll play in the prestigious Folds of Honors Challenge, with the winner earning a berth in next year’s Folds of Honor Collegiate.

The field includes Lee, the defending NCAA Division II champions, and Kaiser, the NAIA champs. South Carolina Beaufort, the No. 2 team in the NAIA coaches poll will be playing, as well as host Grand Valley State, which is No. 17 in NCAA Division II.

“I think we’ve got a good shot,” Burnham said. “We’ve got guys with the right attitude and we’re going to have a good time up there.”