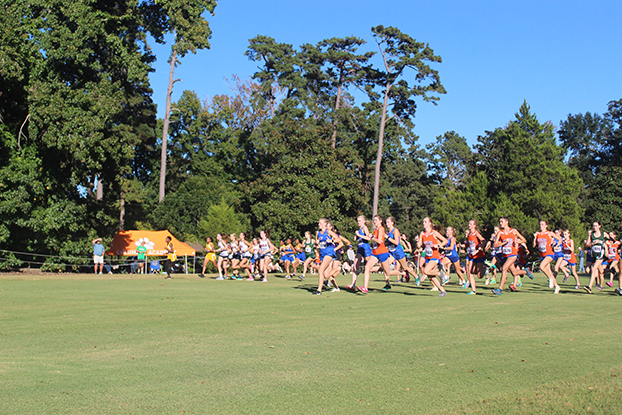 NATCHEZ — Cathedral, Natchez, Jefferson County, Loyd Star and West Lincoln were among teams competing at the Duncan Park Invitational Monday afternoon. Cathedral was the only school of those five to take home any hardware after winning the varsity Boys meet and placing second in JV Girls.

Natchez mayor Dan Gibson and Mississippi Governor Tate Reeves were present at the meet. Reeves happened to be in town for a groundbreaking for Jordan Carriers and his daughter runs cross country.

“We got a lucky deal with the governor. Dan has always been a great supporter of the meet,” Cathedral head coach Tommy Smith said. “I can’t say enough about Greg Brooking for allowing us to run out here. He is good to us and good to the runners. He used to be a runner. He shuts down the course to accommodate us. It is great. We appreciate him. I couldn’t do this meet without the parents who spent eight hours setting everything up.”

Green Wave runner Allie Grace McGehee crossed the finish line exhausted after putting up a time of 21:01.40. She exchanged congratulations and kind words with Blair Pounds of Columbia Academy who had just edged her out by about four seconds.

McGehee had moved up 10 positions from 15th to 5th at one point in the race. She said it was part of her normal start as she starts out slow and picks up the pace as the race wears on. Smith was proud of her performance.

“I was able to push myself mentally. It was a mental push and I got off of what the other parents told their kids,” McGehee said. “The course was hilly with a bunch of turns and felt like it was never going to end. This is my first year running cross country, I started running in my neighborhood for soccer. I liked cross country more so I quit soccer. I like how your mind is clear and it is fun to talk with others while you run.”

She said her and Pounds did not talk during the race but they had before the race started. One of her favorite things about cross country is the people she is able to meet along the way. Natchez High’s Marciallia Oliver finished with a time of 21:21.80 to round up the top 10 in 10th.

West Lincoln’s Ryleigh Purdy is also in her first year running cross country. She had the fastest time for West Lincoln with a time of 27:57.30. It set her new personal record for the season on a course that was intense but not as tough as Choctaw Trails. Running is an intense sport and she gets through it using mental tricks.

“I just think about pacing myself and getting to the finish line as fast as I can. I don’t think about who is beside me. I just try to beat those behind me,” Purdy said. “Today was my PR. Previously it was 27:58. It was a pretty good day. I’ve been improving through practice and pushing myself. I got started running because my brother runs and he asked me to come run. I enjoy it. It is time to block everything out and focus on yourself and make yourself better.”

Her goal is to get down to 25 minutes.

In the boys varsity race, Loyd Star’s Gauge Montgomery led the pack at the start of the meet. He would eventually drop back in the pack but his effort was notable being the only Hornet running at the meet. His teammates had to play in a junior high football game.

Montgomery finished fifth right behind Cathedral’s Owen Bertelsen and beating out Alex Monagan with a 18:22.40 time. He did not enjoy running by himself in the meet. A sophomore, he plays football but JV did not have a game Monday. He has kind of fallen in love with running, his head coach Russell Cruise said.

“I like to have the team atmosphere and having them there to push you on,” Montgomery said. “I love the sport, it is my favorite thing to do. I just love the team and everyone cheering you on at the finish line. It is a great team sport. I’m happy with how I ran today and I have another race Tomorrow after running one last Saturday.”

Green Wave senior Barrett Burgett was pleased with his finish in the meet. He beat out Columbia Academy’s Casey Haddox-Harvey by six seconds to win the Duncan Park Invitational with a time of 17:39.80.

Burgett is setting his sights on former teammate and Green Wave alum Ryan Skate’s time of 17:12 before the end of the season. It is a goal that will take a lot of work to achieve.

“I couldn’t think of a better feeling. I’m happy I could finish strong at home,” Burgett said. “I want to beat Ryan’s time. It is going to take a lot to shave off 15-20 seconds. It will be done through speed work and high mileage workouts. Tommy has pushed our mileage workouts up. Ultimately, I want to run at Louisiana Tech even if I’m not able to run for a team I want to keep running. I really enjoy it.”