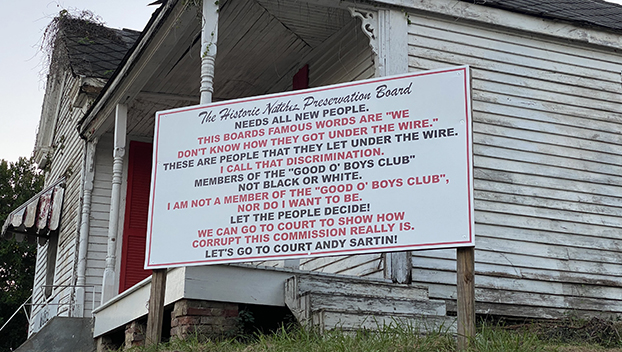 JT Robinson, the owner of a former bordello at 416 N. Rankin St., placed this sign on the property this week. (Jan Griffey | The Natchez Democrat)

NATCHEZ — The latest sign in front of a house that once housed an illegal yet well-known Natchez bordello calls for the removal of all members of the Natchez Preservation Commission and continues to threaten the commission and its chairman with lawsuits.

The sign was posted at 416 N. Rankin St. this week by JT Robinson, who owns the historic house famously known as the former house of Nellie Jackson, a woman of color in the civil rights era who ran a brothel.

It says, “The Historic Natchez Preservation Board needs all new people. This board’s famous words are, ‘We don’t know how they got under the wire.’ These are people they let under the wire. I call that discrimination. Members of the ‘good o’ boys club’ not black or white. I am not a member of the ‘good o’ boys club’ nor do I want to be. Let the people decide! We can go to court to show how corrupt this commission really is. Let’s go to court Andy Sartin!”

This sign replaces a shorter one that said, “Natchez, where the old south still lives. I will see you in court! Andy Sartin,” which was also placed there by Robinson in recent weeks.

Robinson said Sartin, who chairs the volunteer-based preservation commission tasked with preserving properties in Natchez’s historic district, acted discriminatorily when he addressed concerns about the house’s dilapidated condition at a September board meeting.

Robinson said he happened to be at this meeting for an unrelated reason without being asked to attend and was “blindsided” when asked to give an impromptu update on his restoration efforts to the house. Sartin said no formal action was taken during the meeting, therefore Robinson didn’t need to be notified. He added, “I was actually glad he was there,” to give the board an update.

“I don’t want to talk about the sign,” Gibson said, adding he wanted to talk about Sartin and the city preservation and planning commissions who work to help Natchez on a voluntary basis.

“I don’t like it when anyone is maligned and especially not someone like Andy Sartin, who is a volunteer and is one of the best at what he does,” Gibson said. “He is not paid a dime and it’s a difficult position to be in.”

Additionally, Gibson said he does not condone posting any signs that could be hurtful to others and that the city “will be taking any action deemed appropriate under our ordinances.”

“We do know that signs need to be properly vetted and approved. Any sign found to be slanderous will not be permitted in the city,” he said.