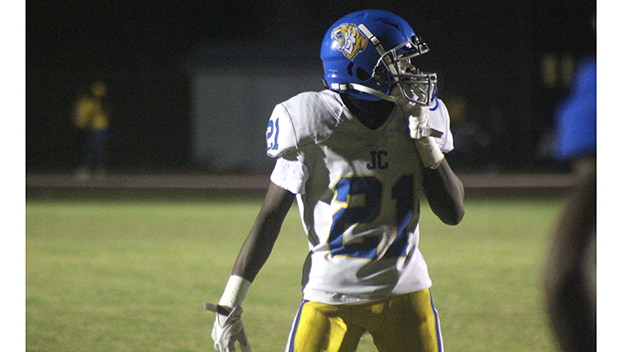 Freshman cornerback De’anthony Miller had a big defensive performance for Jefferson County and helped his team to a 30-28 win over Franklin County last Friday. (File Photo)

FAYETTE — Jefferson County High School senior cornerback Michael McComb returned a fumble on a kickoff return 27 yards for a touchdown with 8:12 remaining as the Tigers held on for a 30-28 win on Senior Night over the Franklin County High School Bulldogs last Friday night.

“They found a way to keep the ball out of our offense’s hands. The times we were able to have the ball, we were able to score a few touchdowns,” Tigers head coach Roderick Holmes said. “Our success on offense was due to our defense being able to get big turnovers.”

The first turnover was an interception thrown by Franklin County quarterback Quez Rancifer. That led to a two-yard touchdown run by junior running back JJ Claiborne with 5:02 to go in the first quarter. Tigers junior quarterback ran in for the two-point conversion to give them an 8-6 lead.

After a scoreless second quarter, the Tigers increased their lead to 16-6 on a 15-yard run by Claiborne and a 2-point conversion pass from Watson to junior wide receiver Luke Bolin with 6:59 left in the third quarter. Claiborne ended up with 13 carries for 65 yards.

“They were big-time, key first-downs,” Holmes said about Claiborne’s performance.

The Bulldogs responded with 2:26 to go in the third quarter thanks to a 4-yard touchdown run by Jailon Brown and a successful 2-point conversion pass from Rancifer to Reshon Baker that made it a 16-14 game.

With 8:25 remaining in the fourth quarter, Watson connected with Bolin on a 9-yard TD pass and the try for 2 points was good on a pass from Watson to freshman wide receiver Jalen Johnson.

“He was a game manager. He only had one interception but it was off a deflected pass,” Holmes said.

Then on the ensuing kickoff, Franklin County’s kickoff returner had the ball ripped out of his arms and McComb picked up the loose ball and returned it 27 yards for touchdown to give the Tigers what should have been a commanding 30-14 lead with 8:12 to go.

“We were up big, but momentum shifted because of a muffed punt on our 1-yard line,” Holmes said. “When we scored 30, it looked like we were ready to close it out. But that muffed punt got them back in the game.”

Tyrese O’Neal scored on a four-yard run with 6:40 left and Rancifer scored on a six-yard run with 3:29 remaining. However, the Bulldogs were only successful on one of their two 2-point conversions. Rancifer was 9-for-20 passing for 121 yards with one touchdown and two interceptions.

“He had that INT in the first quarter and the forced fumble in the fourth quarter that allowed us to run the clock out,” Holmes said. This was his first game back after missing two weeks with a thigh injury. Jamarcus Jackson led us in tackles with 12.”