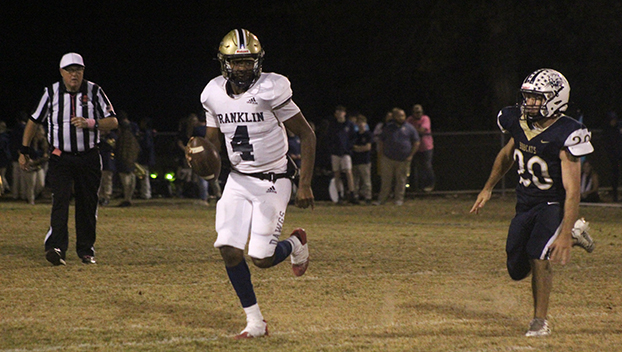 Felton made the play of the game when he used his hands to scoop up a blocked field goal in the second quarter and took it 50 yards to the house. Clay Wright had come off the edge to make the block and clipped Bobcat kicker Andrew Merrell.

After halftime, Merrell appeared on the sidelines in sweats and sat on the bench. He was concerned about his ankle after taking a helmet to the shin. Felton’s touchdown helped Franklin County open the floodgates.

“I got it and I didn’t know what to do so I just took off running and had the touchdown,” he said. “I think it changed the game, it made the energy get up. It made us want to play harder.”

Bogue Chitto dropped the ensuing kickoff and gave the ball right back to Franklin County, who made the most of the possession. A 15-yard pass from Rancifer to Moore made it a 20-3 lead going into halftime.

The Bobcats were marching down the field before the blocked field goal and a short-field touchdown. Shomari Jenkins made a standout play to halt a Bulldog drive when he made an interception.

He took it down to midfield and had put the Bobcats in a good position down 6-3. Franklin County had lined up a certain way and revealed what their play would be, he said.

“I stayed in my zone, and I caught it and took off with it. I was going to try and return it,” Jenkins said. “It gave us a little more and got us back in it, and then we just fell off.”

Franklin County came out in the second half with a simple mission, to put the game away. They are a team defined by hard work and play with a lot of physicality and toughness. Head Coach BJ Smithhart should be happy with the second-half performance as they scored 22 points and shut out Bogue Chitto.

“We had to shut it down. We didn’t want to leave anything out there,” Felton said.

Tyson Windom had a rushing touchdown, Donovan Moore had a 50-yard pass from Rancifer and Felton scored on a 30-yard rush in the second half. Rancifer said the most memorable play for him was the 18-yard rushing touchdown he had at the start of the game. His ability to keep plays alive allowed the Bulldogs to move the ball effectively.

“It felt great to get the win. It gives us a boost in confidence going into the playoffs,” Rancifer said. “This year was personal. I started at the midpoint last season. I wanted to prove a point this year.”

Franklin County and Bogue Chitto are headed to the playoffs now. The bobcats finish the season 7-3, and the Bulldogs improved to 6-4.

Jenkins said they will have to move on from the loss and get back to work on Monday.

“We will have to work hard next week and win a game on Friday. We weren’t ready tonight,” he said. “We have to be leaders and be accountable. It adds a little pressure to the playoffs. We can’t lay down though, we have to come together. We want to take it one game at a time and play all four quarters.”