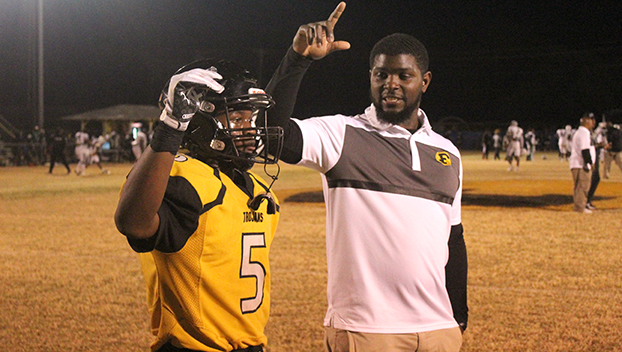 FERRIDAY — With tears in his eyes and a hand in the air, senior Bobby Sheppard joined his teammates in singing Ferriday’s alma mater Friday night. It was a blue senior night for the Trojans as they lost 52-14 to Plaquemine High School (9-0) to fall to 2-7 this season.

However, two seniors did their best to give a positive spark to Ferriday. Chavo Thomas and Sheppard gave the game everything they had and should hold their heads high.

With about 3:20 left in the fourth quarter, Sheppard picked up a blocked punt and started to run. His gold jersey streaked across the field and into the endzone.

“I just thought I have to keep fighting. That is what I do. I play with my heart out and give it all to my last breath,” Sheppard said. “Ferriday football has meant a lot to me. It is what I dreamed about my whole life. I wanted to try and take us to another championship.”

Ferriday may not make the playoffs with one game left on the schedule against Rayville. They would need to win that game to improve their chances but needed to upset Plaquemine Friday night.

Assistant Coach DeVante Scott embraced and consoled Sheppard in the moments after the game as did head coach Cleothis Cummings Jr. Sheppard said Scott told him to keep fighting.

Senior wide receiver Chavo Thomas may be small in stature at five-foot and five inches, but he has a big heart. The receiver scored the first touchdown for Ferriday on a 50-yard completion where he blew past the safety and laid out for a pass from Shacoby Boxley.

“I just give it my all on every play. We weren’t on the same page as a team, so I had to step up and make a play,” Thomas said. “I knew from the moment coach called the play I would score. My brother made a good throw, and I had to finish it.”

His teammates consoled him as he came off the field. Plaquemine players gave him hugs at midfield following the game. Thomas finished out the game on a hurt foot/ankle, which had to be re-tapped in the second half. He tried to keep weight off of it but said it was all good.

Ferriday is a community he grew up in. The town, school and football team mean a lot to him. When Thomas walks across the stage on the football field to get his diploma, he plans to go to college to study business management.

“I’m going to represent Ferriday and show the younger kids they can keep going and push through,” Thomas said. “I want to study business and start my own business.”

Thomas can recall a time when the Trojans went to the Super Dome in New Orleans. He was a freshman and did not get much playing time, but it was an experience he has yet to forget.

“I played some, and the older guys showed me what to do. Football is hard, but you have to work for it,” Thomas said. “I’m just trying to show the young cats how to play now. I want us to finish strong next week. We can’t go out like last year. We have to finish strong.”