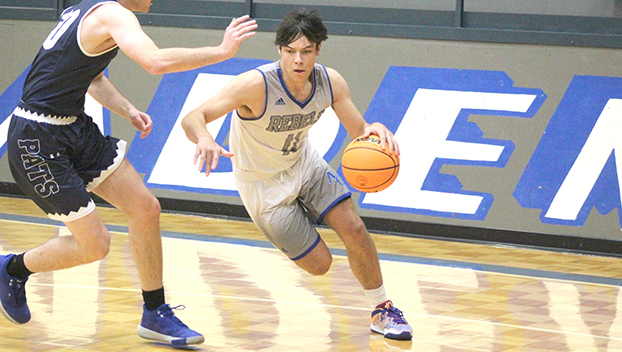 AC's Tyson Young nearly had a triple-double to lead the Rebels past the Copiah Academy Colonels. (File Photo | The Natchez Democrat)

It was a different Rebels team than the one that took the floor in last year’s state tournament. DK McGruder, Tiqi Griffin, Jamar Kaho Jr. and the Barnes twins left big shoes to fill when they graduated last spring.

Tyson Young made his return to the program with a 17-point night, he played baseball at Monterey last spring. Trenton Davis, who played at Vidalia High School last year, scored 14 points for the Rebels. The new big man is a force to be reckoned with in the paint.

“It is a new team, so I’m trying to get my feet wet,” Davis said. “It has been good so far though. This team feels like my family. I try to stay consistent on the court. This is really our first game together.”

Davis played a big role on the Vidalia team last season as a physical presence down low. Samuel Merriett scored 7 points and helped spread the ball around.

Freeman was a little frustrated with his team as he said they could have played better against East Rankin. The Patriots mounted a comeback in the second half and closed the gap offensively.

Freeman said it hurt not having Green, who might return for action Tuesday.

Davis said they need to keep improving throughout the season to reach their goals.

“We have to keep going to practice and keep getting better,” Davis said. “I think we will be a good team this year and should go far in the playoffs. We just have to play good basketball.”