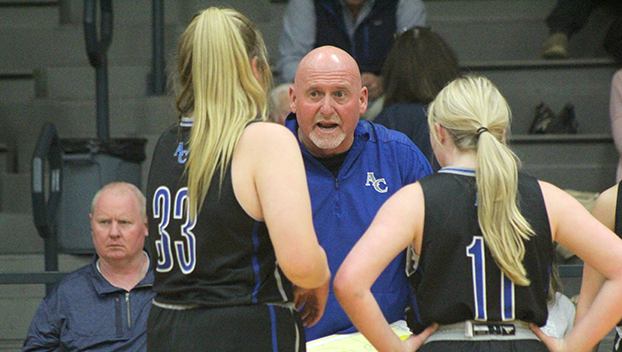 Richy Spears speaks to his team during a timeout in a game against Presbyterian Christian School Tuesday afternoon. He said they faced a lot of pressure and hopes they learn from the experience before district play. (Hunter Cloud | The Daily Leader)

Christian Jones, McKenzie Campbell, Paishense Rogers, Josie Gamberi and Kessley Maples scored two points. ACCS dove for loose balls and drove hard to the paint in the game. Head Coach Richy Spears always found their effort to be a positive last year and it was a positive again Tuesday.

“We just have to keep playing. We hustle and play hard, we just have to make things happen,” Spears said. “Their effort is there. We have to have something good happen for us.”

Spears said they can take some lessons from the tournament. AC will have to play tough teams like Madison St. Joe and a talented Cathedral this year. Games against East Rankin and Presbyterian Christian help the Rebels get ready.

“We have tough teams in our district and I hope we get better in handling pressure,” he said. “We needed to see a team who pressed. We are doing this to get ready for district.”

Spears had one more message before the holiday break.