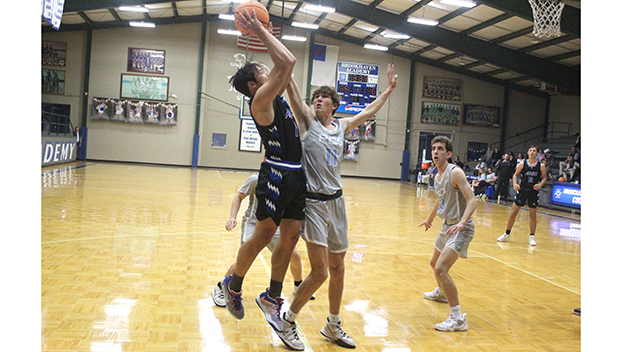 At halftime, AC went into the locker room down 50-13. It was a tough way to end the tournament but AC has nothing to hang its head about. Due to reaching the semi-finals in Football, AC has not been able to switch gears to basketball.

They played their first game against MRA last week and PCS is another tough 6A opponent. Head Coach Matthew Freeman said they were not ready for the game.

“Two of our first three games have been tough. Presbyterian Christian plays man-to-man basketball and presses. We are still knocking off rust from football season,” Freeman said. “We missed the live game action that you can not simulate in practice. We will figure it out as the season goes along.”

Edarius Green and Trenton Davis led the Rebels in scoring with eight points. Green was absent Monday but returned to action Tuesday. He is a tough force down low as his frame puts other teams in a size mismatch. Green made three rebounds on his own missed layup attempts in the span of about eight seconds because PCS could not do anything about it.

AC also had 18 fouls and five missed free throws. They had reached 10 fouls by halftime and Tyson Young fouled out with one point. He could be pivotal to the Rebels this season. Last year, he played a significant role in the first half of the season.

“Tyson is our guy we are leaning on in terms of being one of our true basketball players,” Freeman said. “We hope he can score buckets and be a sound, fundamental player for us this season.”