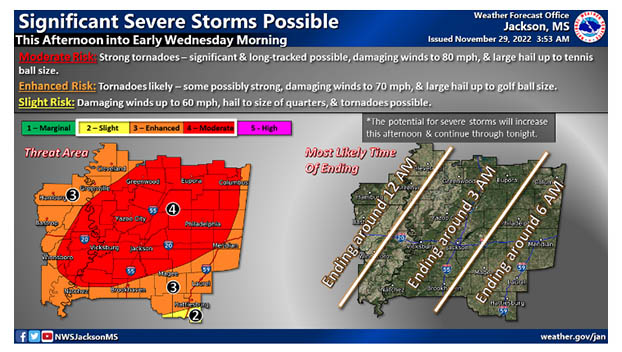 NATCHEZ — Due to potential inclement weather, this afternoon’s special called meeting of the Natchez Mayor and Board of Aldermen to discuss matters dealing with the Natchez Police Department has been postponed until 4 p.m. Wednesday, Nov. 30.

The meeting was scheduled to interview four candidates within the Natchez Police Department with the rank of Commander to find one to be the Interim Chief of Police, as Natchez Police Chief Joseph Daughtry is resigning effective Dec. 31.

“The primary threat is tornadoes, some of which could be strong and long-tracked,” Cox said.

“The threat begins after 2 p.m. and especially after 4 p.m., severe weather will start to ramp up,” Cox said. The weather risk has a long duration and could possibly continue into the early morning hours.

Natchez Police Department asks that people avoid any unnecessary traveling after 4 p.m. today to reduce the potential of weather-related accidents.

The Adams County Safe Room will open as a shelter if the county is under a Tornado Watch, said Adams County Volunteer Fire Coordinator Darryl Smith. In the event of power outages, officials said utility companies will not mobilize work crews until after the bad weather clears.