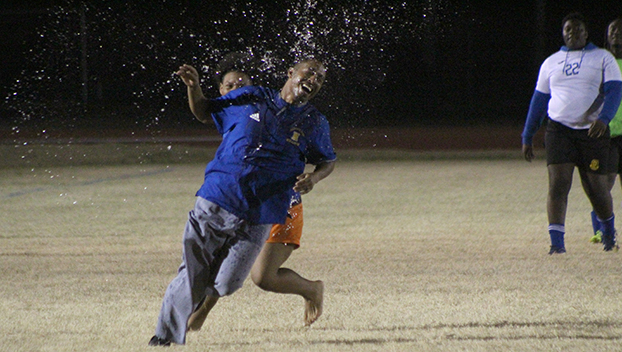 Head coach Josh West tries to outrun a shower from a water bottle as his team celebrates its 5-1 victory Wednesday night. It is their second win of the season and came on senior night. (Hunter Cloud | The Natchez Democrat)

NATCHEZ — Friday is opening day for the Natchez soccer team as the Bulldogs take on McComb tomorrow night. The Bulldogs are coming off of a season finale in which the boys team defeated Forest Hill with offensive fireworks and brought excitement about the program.

It is all coming together for head coach Josh West. West is a former Natchez soccer player who is also an assistant football coach. His leadership has developed a championship middle school football team and is making progress on the soccer pitch.

He said Jeremiah Dent is working as an assistant coach after moving to Natchez High from Adams County Christian School. Dent is coaching the boys while West works closely with the girls team.

“One of my goals was to improve the idea of playing soccer and introduce it to the kids here. We wanted more participation, and I will have 36 boys and 27 girls playing. The growth has started, I’m excited,” West said. “We have athletic kids who are playing. Reps will matter and they will have a chance to see how the game is played and get a feel for the flow to get better. This is the first time where we could scrimmage 11 vs 11 so I’m excited about that.”

Natchez has a lot of athleticism with Darrius “Squirrel” Williams serving as the main workhorse in the midfield. West said other players to look out for would be Jeremiah “Beast Mode” Tillery, Javis Johnson, Kenny Fitzgerald and Ashton Williams. Johnson is an exceptional athlete who will play in midfield, Fitzgerald has shown nothing but growth especially with his touches and Williams is another senior with experience on the pitch. He added goalkeeper Omari Johnson returns for his second season and has been anxious to play. West said he is really excited for Squirrel this year.

“He is fully invested in soccer and has been promoting the program every chance he gets,” West said. “He has it set in his mind to do something special this year.”

West’s goal with both the boys and girls team is to have an athletic starting 11 who know what they are doing tactically in soccer. He is working to change the mindset of kick and chase and his subs will be athletic as well.

The girls team is looking to play more organized than they did last year. They gave a lot of effort last season but lost quality with Carmen Butler graduating. Keaura Mearday, Jaylah Smith and Kierstin Givens will look to step up and lead the team.

West said Mearday should show growth as she is a junior this year and started with the program in middle school. Smith will play midfield. She is strong and very smart and has been with West’s squad the last three years, he said. Givens is one of his favorites for her quality of ball control and understanding of the game. She grew tremendously last season, he said.

A former teacher at Natchez Middle School, West moved to the high school this year. He said working at the middle school has allowed him to develop relationships with the kids on the team.

“I know everyone. They are comfortable with me and I didn’t have to recruit them,” West said. “The girls show excitement about soccer and the boys team has a lot of football players coming out due to word of mouth. It is exciting and the other kids want to be a part of it. I’m used to dealing with large crowds from my years coaching PE. They know my mantras and keys and I can deal with them better than most.”

The 2022 World Cup is underway in Qatar right now and has provided exciting soccer games to watch, West said. He is using the World Cup to teach the kids more about soccer so they can have a visualizer for how to use space, pass back and play defensively.

On Wednesday, they went to the school’s Green Room to watch highlights from the World Cup and learn from it. It is an exciting way to get the kids engaged, West said.

“Being a teacher you have to understand the kids each have different learning styles. Some are kinesthetic, some are verbal and others are visual,” West said. “We are using highlights to teach spacing. It seems like a minimalist thing to drop the ball back. Kids want to move forward and they have to understand sometimes you need to pass the ball back. Especially with the girls, they need to find space. We have benefited from watching game clips and talking. It is also a good tool for showing offsides and defensive techniques. Kids can go to YouTube now and I didn’t have that luxury in school.”

The match against McComb will be played Friday at 5:30 p.m. in Natchez at the NHS football field.