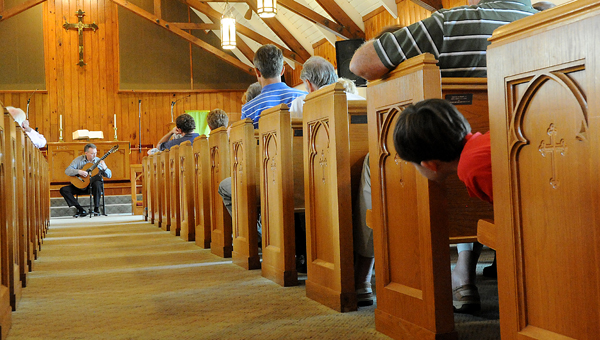 NATCHEZ — Miss-Lou United Methodist Churches are exploring whether to disaffiliate from the denomination along with other UMC churches around the globe.

The movement is spurred by division in the church on the issue of the ordination of LGBTQ clergy and performing same-sex marriage.

Members of local churches and clergy on both sides of the issue agree, it’s a painful process.

The Rev. Vicki Landrum, who pastors Grace and Kingston UMC, said it’s as though churches are getting a divorce from the denomination.

“In a divorce, it’s painful to both sides,” she said.

In recent weeks, members of local UMC churches took a straw vote to get a clear idea of which direction the church is leaning, to disaffiliate or not.

“Here at Grace, two-thirds of the people present at that meeting (just under 50 church members) expressed that they want to disaffiliate,” Landrum said. “We have informed our district superintendent that the church wishes to take the next step in the disaffiliation process.”

Kingston has a meeting in December where a straw vote will be taken, she said.

UMC Churches in Vidalia, Ferriday and Jonesville pastored by the Rev. Steve McDonald also voted in favor of disaffiliating.

“All three churches that I pastor have begun the process,” he said.

Scott Slover, chairman of the administrative board at Jefferson Street, said 75 percent of members present at its meeting voted in favor of disaffiliation.

The votes remain unofficial until the superintendents representing each district set a date and time for an official vote. Two-thirds of church members have to vote in favor of disaffiliation before it becomes official. State conferences of Louisiana and Mississippi should ratify the decisions in June of 2023.

A yes or no vote isn’t necessarily a reflection of whether the church is more conservative or progressive in its views on sexuality. Generally, the disaffiliating churches have been more conservative.

However, McDonald said there has been growing division in the denomination on multiple issues for decades that play a part.

“One of the issues many of us are struggling with is the power and authority of bishops and there being no way to hold them accountable,” he said.

He added, “The issue is not whether LGBTQ individuals can be members of UMC. The issue is whether or not the church should change its doctrine. … People are people and nobody should be denied access to worship.”

Slover said he believes “being homosexual is not sinful.” He added he does not speak for the entirety of Jefferson Street church’s view of the issue but there are other church members who feel the same way he does.

“Their issue stems from the lack of guidance that United Methodist Churches have been given and they are disappointed with the oversight of pastors and don’t like the direction that UMC is headed,” he said, adding, “We welcome everyone to the church, whether you are gay or straight.”

To the contrary, Landrum said some feel that UMC could begin changing its stance on same-sex unions and the ordination of clergy in homosexual relationships which is the root cause of churches leaving the denomination.

“Since 1972 when the wording on homosexuality appeared in the Book of Discipline for the first time, there has been debate about all of this. At the general conference of 2016, the church just about came apart at the seams,” she said. “At the heart of where we are right now is there will be no same-sex unions in United Methodist Churches and pastors won’t perform those.”

What spurred the movement

In 2019, a special meeting was held of the UMC general conference where two major decisions were made.

The “Traditional Plan,” which affirms UMC’s stance that LGBTQ individuals in a homosexual relationship cannot be ordained and that clergy should not perform a same-sex marriage, received 438 yes votes (53 percent) and 384 no votes (47 percent). The diversity in UMC churches on this topic was evident and therefore Paragraph 2553, which is a disaffiliation clause that allows churches to leave the UMC and retain their property, was added to the Book of Discipline.

The clause was added “because of the current deep conflict within The United Methodist Church around issues of human sexuality,” it states.

With these provisions, disaffiliating churches are allowed to keep property currently held in trust, but anything that has the UMC emblem — a cross and a flame — has to be returned to the UMC conference.

“Grace Church pays the bills and keeps up with the property but it is actually held in trust for the United Methodist Church,” Landrum said. “Normally, if a church pulled out, they couldn’t take the property. That includes the building and assets.”

The cost of disaffiliation varies from state to state, but in Louisiana and Mississippi it is two years of apportionments. Apportionments vary from church to church depending on its size. Larger congregations with larger budgets pay more on the principle that those with greater ability to give should contribute more. The church must also pay two years of pension responsibility that support current and retired pastors.

This provision expires on Dec. 31, 2023, and the next general conference isn’t until 2024. The general conference, composed of laity and clergy of churches internationally, meets every four years unless there is a special called conference.

Many are left with questions they hoped would be answered during the 2020 general conference, however, because of the COVID-19 pandemic that didn’t happen, Landrum said.

“For churches to take advantage of being able to get the property, there’s this rush to complete this disaffiliation process. Since the general conference can’t meet, we can’t undo it or extend it,” she said. “There’s this sense of urgency that churches have to get out and take our property with them.”

Recently, Mississippi’s conference added more leniency to Paragraph 2553 by stating it will be honored up through June of 2025, Landrum said. That way churches can wait until the general conference of 2024 and make a more informed decision based on the direction the UMC denomination is headed.

UMC churches that have been a part of the same denomination for decades or centuries may soon have to redefine themselves. Jefferson Street UMC and Kingston UMC were established in the 1800s and Grace UMC in the 1950s.

“Jefferson Street has been here for many years and will be here many more years whether we disaffiliate or not,” Slover said. “I’ve been a member of UMC my entire life and my mom who has passed away was a member of UMC. It’s not pleasant at all, whether you’re in favor of disaffiliating or not. I feel like it’s an undesirable contention that should have been decided on a much higher level.”

Vidalia UMC is in a unique position after its church building burned to the ground in July 2021.

McDonald said the presbyterian church that Vidalia UMC had been renting from closed after seeing a decline in members and gave its building to Vidalia UMC.

However, the building wasn’t large enough to accommodate the entire church so the congregation remains committed to rebuilding on the site of the former church on Oak Street, he said.

“We’re about two to three months away from seeking a contractor for the building,” he said, adding, “We’re hoping that (the presbyterian church) might make a desirable venue for weddings, concerts and other activities. Our sadness for them is tempered by our joy that we have a building because without it we’d be homeless.”