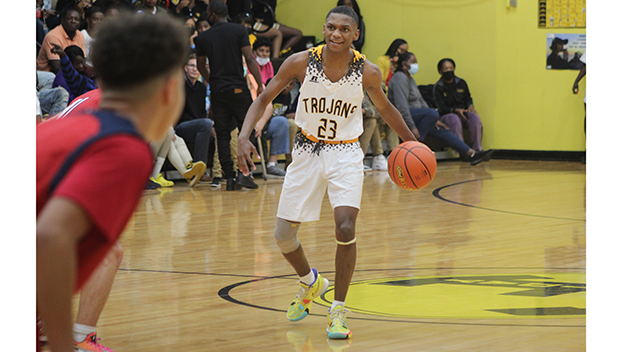 Pamerion Swanson is one of the leading seniors for the Ferriday Trojans this year. He plays with a lot of emotion and intensity. (Hunter Cloud | The Natchez Democrat)

FERRIDAY — Facing a tough schedule to start the 2022-2023 season, the Ferriday High School Trojans’ varsity basketball team is looking to turn things around for second-year head coach Shawn Davis. However, that is proving to be more difficult than expected so far.

Ferriday is 2-4 so far this season and faces three LHSAA Class 1A schools this week alone — at Block High School in Jonesville, La. on Monday night followed by home games against Delhi Charter School on Tuesday night and Sicily Island High School on Friday night.

The Trojans lost at home to Delhi High School 68-44 on Tuesday, Nov. 15 and then at Franklin Parish High School 71-57 on Friday, Nov. 18. They picked up their first two wins of the season at the Marksville Tournament right before the Thanksgiving holiday, defeating Avoyelles High School 67-31 on Monday, Nov. 21 and Bastrop High School 62-40 on Wednesday, Nov. 23.

“The two wins, everyone was in practice leading up to those games,” Davis said. And that has been a big problem that he hopes can go away before district play begins. One of the eight seniors that was on the roster when the season began has since been kicked off the team, but Davis hopes he can return in January.

Last week was a tough one for Ferriday. First, they lost to Richwood High School 62-40 last Wednesday at the Delhi High School Tournament that took place at Mangham High School. Then they had a tough loss at MHSAA Class 3A Jefferson County High School 74-73 last Friday night.

“We were up 18 points early in the game then down 16 points at one point going into the fourth quarter,” Davis said. “We took the lead with 16 seconds left. They were fouled and hit one free throw and missed another. We thought we got fouled at the end of the game. Took the 3-pointer. One referee called the foul and another called the game over. It was just one of those situations. That loss is going to serve us well.”

One thing that Davis was not too pleased with was the amount of fouls the Trojans were called for — 40 total fouls. He added that the Tigers had much fewer fouls called on them.

“Sometimes we show up and sometimes we don’t. We played a tough schedule with a lot of 3A and 4A teams. Delhi is a good 1A team,” Davis said. “We have a lot of disciplinary problems. If they can stay out of trouble, we can be a good team. Our record is where it should be. The Richwood game, the final score was not indicative of how hard we played. The score 48-40 with about 3:35 left and they went on a 14-0 run (to end the game).”

With the schedule probably not as rugged as it has been, Ferriday should get better as the season continues — if all the players show up at practice as Davis would like to have happen.

He also hopes the seven seniors that are on the team can provide not only consistently good play on both ends of the court, but also some true leadership. Among the key players returning are senior point guard Pamerion Swanson and senior shooting guard Keyman Milligan. Davis said the wild card to how good the Trojans can really be is sophomore center Tre Jackson.

Davis said the Trojans could have what it takes to compete for the LHSAA District 2-2A championship this season. He added that there are two teams who could stand in their way: Madison High School and Rayville High School. He noted that the Madison High Jaguars lost a lot of players from last year’s team, so they could be vulnerable. But he’s not counting them out.

“I saw Madison play. I haven’t seen Rayville. I’m going by the past,” Davis said. “They’re going to be very good. I feel like we have the opportunity if we can continue to gel and get our rhythm and continuity together.”

Game times for the Trojans’ games at Block on Monday as well as home against Delhi Charter on Tuesday and Sicily Island on Friday are slated for 7:30 p.m.