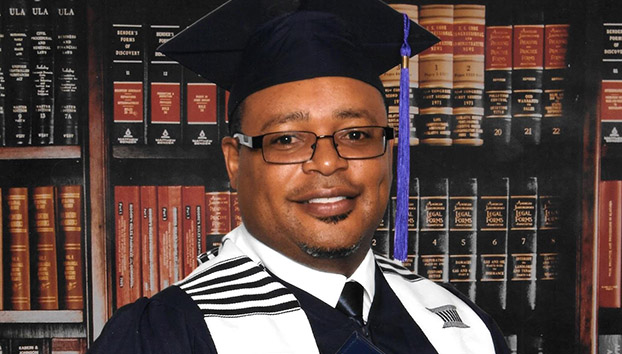 NATCHEZ — On Dec. 9, Adams County Sheriff Travis Lamont Patten will fulfill a promise he made to his mother before her death in 2016.

Education, Patten said, was something very important to his mother.

“When we were growing up, we were very poor early in my life,” Patten said. “My mother actually dropped out of high school in the 10th grade when she became pregnant with my oldest brother.”

For Patten’s mother, something “clicked along the way. She didn’t want to continue to live in poverty,” he said.

His mother, Cynthia Barfield, went back to school, earned her GED, then her bachelor’s degree and finally her master’s degree in mathematics.

“Along the way she also found God and pushed putting him first and getting a quality education to all of us,” Patten said. “That changed her life, and through her ministry and by educating others, it changed the lives of so many others, not only in Mississippi, but throughout the world. As a mathematics teacher and then an ordained minister, she traveled all over the world educating others about the importance of higher learning.”

Barfield was diagnosed with cancer in 2008 and beat it. In 2015, when Patten ran for high first term as Adams County sheriff, the cancer had returned. Barfield was an important part of his campaign and actively campaigned for her son.

“She told her children many, many times, there’s always room for improvement. During that time when I was running for sheriff, she continued to tell me, put God first and get your education,” Patten said. “I saw her out campaigning and taking chemo treatments at the same time.

“She told me, ‘Son, don’t stop here. I want you to understand how important it is to get your degree. You are on a different platform now. So many eyes are on you. It is so important for you to have that degree.’ I made a promise to her then. I told her, ‘I’m going to finish this degree.’”

In 2016, Patten enrolled at Co-Lin Community College at Natchez to begin fulfilling his promise. Eight months later, his mother passed away.

“I didn’t stop. Before she died she told all of us that life goes on, whether she is here or not. My entire family is big on honoring our commitments and keeping our word, because that’s how she raised us.”

After graduating from Co-Lin, Patten took a year off to campaign for his second term as sheriff. Once that was complete, he began his work toward a bachelor’s degree at Jackson State.

“I want everyone to know, I absolutely love Alcorn State University, but at the time, they weren’t offering a fully online degree in criminal justice. Jackson State was,” he said.

An online degree was Patten’s only option because of his job and commitments as sheriff of Adams County.

The Jackson State program was fully online and offered flexible hours so Patten would work on his degree at the times that worked for him.

“I have to thank my wife, Brittney, and my kids for bearing with me and supporting me. For four years straight, they had to watch me coming in for work or whatever event or emergency I had been to and lock myself down for four to six hours a day and do homework.”

Patten is father of three children: Travis Patten Jr., who is in the U.S. Army in Bamberg, Germany; Micaela Patten, who is a senior at Natchez Early College; and Anthony West, who is an eighth grader at Cathedral.

Patten graduated from Natchez High School in 1997 and two weeks later was in boot camp with the U.S. Navy. His first stop with the Navy was Italy, where he joined the crew of the USS John F. Kennedy aircraft carrier.

“It’s certainly been a journey,” he said. “I am so thankful to my family who really stepped up and filled in those gaps when I had to work on this degree. I can’t tell you how important it was to have my family’s support.”

Patten said his mother also taught her children to do everything with the spirit of excellence in mind.

“That really hit home for me while earning this degree,” he said. “I am graduating magna cum laude, and this is coming from a young man who didn’t always make the best grades in high school. Graduating with honors is exciting, but it’s also a humbling experience. I really want young people and older people alike to know it’s never too early or too late to obtain your degree. Technology is key today. Times have changed and qualifications for good jobs are more stringent than ever. Like my mother said, don’t stop where you are at now. Keep pushing to earn your degree.”