NATCHEZ — Today and Saturday, the Trinity girls track team will have a number of athletes competing for a state championship.

And a couple of those athletes aren’t even in high school yet.

“Abby is competing in the 3,200-meter run, and I think is a big honor for her at her age to be able to qualify for state,” Broome said. “She’s one of my top runners for our state championship cross country team, and she has a lot of potential.

“Sloan and Brandis are on our 800-meter relay team, along with Madelyn Cross. They did well this year. They won district, and got off to a slow start in South State, but still managed to qualify. I’m hoping they turn in a strong performance.”

In addition, the state meet will also mark the final meet for three-time state champion Jheri Ogden, who’s graduating in May.

“She struggled with some injuries this year, but she still owns the state record for the fastest time in AA’s 3,200-meter run, before we moved down a classification,” Broome said.

“She’s been a delight to coach, and will go down in the record books as one of the best distance athletes Trinity has ever had.”

Two faces Trinity girls basketball fans will be familiar with are Bethany Ogden and Madelyn Cross, both of whom will also compete in Clinton.

“Bethany’s competing in the 400-meter dash, and she’s an all-around good athlete,” Broome said. “She finished first on our cross country team.

“Cross won district in high jump, and came in third in South State. She’ll be the only one competing in field events this year.”

No matter how the Lady Saints finish, Broome said this year’s performance by his girls bodes well for Trinity’s future in the sport.

“I’m proud of the girls for their hard work,” he said. “It’s been a long, hard season. We face so many challenges with different sports and academic schedule.

“We’ve done well considering how young we are. We have only two seniors, and if our younger runners continue to produce, it bodes well for next year.”

The Trinity boys track team will also compete in the state championship. Despite winning the district, head coach David King said he was wary of the level of competition the Saints would face.

“We’re just going up there with hopes of competing well,” King said. 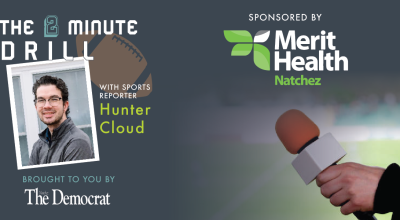