Trinity Episcopal Day School freshmen, sophomores, juniors and 10 advisors, hopped a plane to Puerto Rico Sept. 7, to have some fun, experience another culture, and most importantly — to get a grasp on their really big backyard.

Linda Rodriguez, who teaches Latin, history, psychology and minority studies at Trinity, organized the expedition with the goal of exposing her students to an unfamiliar environment.

The trip was part of Smithsonian Select Travel, which offers a Carnegie credit to each student who fulfills trip requirements — good for one full year of class work.

“Some of the students had never even flown,” Rodriguez said. “And some had never been further than Gulf Shores.”

Students, who are used to being hosts to so many Natchez tourists, were the foreigners for once.

Rodriguez said as soon as the plane landed, students stuck their feet in Puerto Rican sand, explored caves, jumped into waterfalls and even visited the fort where Spanish explorer Ponce de Leon is buried.

“The whole purpose of this was to enhance the learning experience of the children,” Rodriguez said.

She said while classroom technology has come a long way, there is nothing like using all of the human senses to expand students’ minds.

“Flora and fauna — they got to see it,” Rodriguez said. “They went to a place where Christopher Columbus set foot.”

When it came to food, students chimed together and said, “Rice, beans, chicken.”

Caleb Cross and Cole Radzewicz kayaking to the bioluminescent bay.

But the students also tried fried plantains and a new Trinity favorite — flan.

“I could eat it the rest of my life,” ninth-grader Abby Massey said. “It was sweet, with a caramel topping.”

Students said the locals were nice, and were patient with their lack of Spanish, though some students said Spanish classes at Trinity helped them get by.

“The trip made me realize how different people are,” Massey said.

But students agreed the most memorable experience of the trip was kayaking in a bioluminescent bay.

Millions of tiny phosphorescent plankton create a glowing effect in the water, and even stick and glow on skin. The stroke of a paddle left a blue trail in the water. Though the students returned from the trip weeks ago, they still seemed enchanted by the tiny, luminescent organisms.

“They were like little stars, blinking,” ninth-grader Cena Mullins said.

Rodriguez said the most memorable part of the kayaking excursion for her, was watching the students be overcome with awe as they floated through a mangrove path to the bay.

“For 30 minutes no one said anything,” Rodriguez said. “They were taking it all in. And that was the theme of the trip — seeing something they have never seen.”

While the spot was breathtaking, there were a few mishaps too.

“I flipped out of my kayak,” Massey said. “And my paddle broke — I was trying to stop myself from going into a bush.”

Students also got in touch with their Latin sides as they took salsa classes. They danced to a live salsa band — one of the best salsa bands on the island, Rodriguez said.

Though the excursion took students to Puerto Rico in the middle of hurricane season, they lucked out, but did experience plenty of daily tropical rain.

The scariest part of the trip, everyone agreed, was flying home on the 10th anniversary of the Sept. 11 terrorist attacks. But, the students made it home to tell the tale.

Rodriguez said she has stacks of journals waiting to be graded from the trip. She said personal documentation will make the students’ memories of Puerto Rico permanent ones.

“When it’s time for college, I hope they won’t be afraid to branch out,” Rodriguez said.

“I hope they will consider places like Boston. I’d love our kids to start thinking of the world as something we can explore. We want our children to stay close, but also experience what the world is, and what it can offer.” 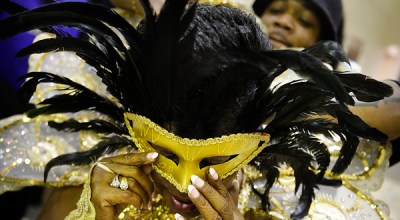