“They have been huge to the program,” he said. “Three of them have played since ninth grade (Smith, Perry and Campbell), and the other four it is their first year really. We really missed having them every year.”

Campbell said he started playing football at ACCS in the seventh grade, and he has made some special memories during his playing career.

“I got to play in a playoff game and got to be part of the second best record in school history last year,” Campbell said.

And despite a disappointing record this season, Campbell said he would make a new memory tonight.

“One that will stick out to me is being able to play offense and defense on senior night,” he said.

Campbell said he would miss taking the field with his teammates after the game is over.

“It’s going to be tough,” he said. “I’ve put my heart and soul into playing football at AC. This whole week has been full of last days. Tuesday was the last day in full pads, and walking out at our last pep rally will be tough. But once the game starts, it will be business as usual. The emotions take over after the game.”

Perry, who is a running back and defensive end for the Rebels, said two years of his football career went by like a day.

“It went by really fast,” he said. “Two years ago I was not expecting this day ever to come and now I can’t believe it’s here.”

Perry said he would remember walking out onto the field to fireworks at last year’s playoff game against Brookhaven.

He said he could not express what his emotions would be before his final contest tonight.

“Hopefully, it will be like any other game,” Perry said. “We had a really good week, and we’re having fun and preparing like we normally would. I hope everyone comes out like it’s a normal game.”

Quarterback Johnny Smith said he wants his final game to be one to remember.

Smith said one message he wants to leave to his younger teammates is to take advantage of the time they have.

“I would tell them, ‘don’t wait until your junior year to start being serious about football,’” Smith said.

Wide receiver and defensive back, Chris Carrel, who is originally from Houston, Texas, said the Rebel players are ready for tonight’s game.

“We are amped for it,” he said. “We really haven’t felt this way about a game all year. It’s the last game, and it’s all or nothing.”

Carrel said the Rebels have a chance to do something tonight that many teams do not get the opportunity to achieve.

“Not many teams can say they won their last game,” he said. “You either have to be in our situation or win state.”

Carrel said even though he was not part of the ACCS family for long, he definitely feels like a full member.

“I haven’t known these guys my whole life but now I feel like I have,” he said.

Wide receiver Ethan Loyed also moved in to play for the Rebels. Loyed was living in Shreveport, La., before coming to ACCS.

Loyed said he could not put into words the things he would miss about playing football at ACCS.

“I couldn’t tell you about that. (I will miss) everything,” he said.

Loyed said his most memorable moment was catching a pass across the middle of the field in the Rebels’ only win of the season against Riverdale Academy, and promptly getting smashed by a Riverdale defender.

“It knocked my helmet off,” he said. But, Loyed held on to the ball, he added.

Latimer said he played football as a ninth grader, but then his mother said she did not want him playing anymore.

By the time his senior year came around, Latimer said he got tired of watching and wanted to get back out and play.

“I sat back and came to the games but sitting in the stands felt weird,” he said. “I got fed up watching.”

Latimer said he would tell his younger teammates to look forward to next year.

Taylor, who has been sick all week but plans to play tonight, said the build-up to his last high school football game would be stressful.

He said he decided to play football this season, and has enjoyed playing for the Rebels.

“I have enjoyed playing around with it this year. I just figured it was something else I could do,” he said.

McKeiver said he hopes some of his younger players will learn from the 2011 seniors’ cohesion with one another.

“I really hope they stick together like this group,” he said. “They are a tight-knit group, and they stuck together and at times put the team on their shoulders.”

The Rebels will play their final game of the season tonight against Columbia Academy. 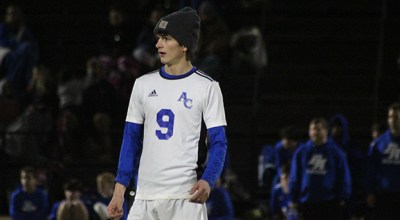