Wendy White | Special to the Democrat — Cathedral Middle School’s Grace Ann White dribbles the ball down the court against Wesson Middle School Tuesday at Cathedral. The Lady Green Wave finished their season 10-3 and won the 2011 Catholic Tournament in Madison this past weekend.

NATCHEZ — After losing a number of players from last year’s team, the Cathedral Middle School girls were close to being eliminated in the first round of the 2011 Catholic Tournament.

“It was about like you can imagine,” Lady Green Wave coach Ronnie McMillan said. “Amidst the groans and ‘you’ve got to be kidding mes,’ we had to run middle-speed suicides and do regular warm-ups to get them up and running.

“I guess it didn’t work, because we fell behind nine points very quickly.”

St. Joseph’s was ahead 15-11 at the half, but Cathedral was able to take a 22-21 lead at the end of the third. And that’s when McMillan opted to switch from man to zone defense.

“It was a game-long struggle to get back in it,” McMillan said. “They had three guards that we tried every combination we could to cover in man defense, but they were just too quick.”

After trying the game with two minutes to go, the Lady Green Wave hit two shots in the last 45 minutes to win 29-24 and face rival St. Aloysius in the championship match.

And that game went much more smoothly for Cathedral, as the Lady Green Wave cruised to a 30-13 win.

“We got to play everyone,” McMillan said. “We didn’t dominate anyone nearly like we did last year, because we didn’t have as much of an ability to press.”

Despite that, McMillan said the girls he had this season ended up gelling nicely as the year went along.

“We have some good seventh graders that really added to this year’s team,” McMillan said.

“Grayson Bryant gave us a good outside shot we didn’t have last season, and Lauren Rymer turned out to be a very physical player. She developed an inside shot and a physical presence down low that we didn’t know we had to start out with.”

McMillan also singled out Kennedy Gray, saying the sky was the limit as far as how good she wants to be.

The Lady Green Wave finished the season 10-3, with two losses to Loyd Star and one loss to Wesson.

But McMillan said he was happy that he got to cap off the season with a Catholic Tournament trophy.

“The goal at the beginning of the year was to win that tournament,” McMillan said. “Those kinds of tournaments help you build depth, because when you go to that tournament, you need the depth.” 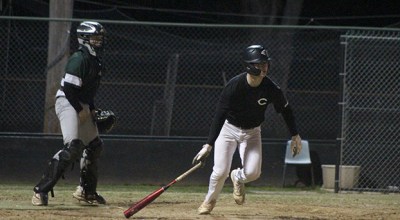