Ferriday High School varsity football coach Richard Oliver speaks to the team after workouts Monday afternoon at the school. The team has been preparing for the upcoming season since school started in January. (Lauren Wood \ The Natchez Democrat)

FERRIDAY — The Ferriday High School football team is looking to build on last season’s foundation, when the Trojans made it to the first round of the playoffs despite having a young team.

Since Jan. 1, the returning players have been in the weight room several times a week, and head coach Richard Oliver said his players are focusing on explosive lifts so far this offseason.

“When I first started coaching at Istrouma (High School), we went down to LSU and saw some of the things (strength) Coach (Tommy) Moffitt was doing, and we implemented them,” Oliver said. “We saw the difference in our kids becoming better athletes,”

On Mondays, Tuesdays and Thursdays, Oliver has his players in the weight room during the latter part of the school day working out. Oliver also said he will start to incorporate outdoor conditioning when the temperatures start getting warmer.

“These are just some things we want to do to get our football players’ bodies changed and built for the sport,” Oliver said.

Oliver also said he’ll be starting a track program this spring, as he did during his coaching stops in Istrouma, Zachary and Scotlandville high schools.

“The main thing you can do in football is teach them to run, and we always had good participation in track where I coached,” Oliver said. “You can teach the players how to run properly, and it’s a good way to promote one-on-one competition.”

That’s good news for running back Jarvis Brooks, who will be a senior this fall. Brooks said he hasn’t participated in track since his freshman year, since that was the last year Ferriday High School had a track program.

Jarvis Brooks lifts weights during the workouts. Brooks, a running back, will be a senior this fall. (Lauren Wood \ The Natchez Democrat)

“We went to regionals that year but we didn’t qualify because of a technicality,” Brooks said.

Brooks said there are several things that football players can pick up from track and translate it to football.

“It teaches you how to run and helps you coordinate your body,” Brooks said. “If I run correctly, it helps make me more elusive and makes me an all-around better athlete.”

On Wednesdays, Oliver said his team does form-type running drills and character-building activities. On Fridays, it’s either volleyball in the gym or touch football outside.

“We always want the kids to be competitive, but those things give them a break from the weight room more than anything,” Oliver said. “Lifting weights tears your body up. You can’t do it every day.”

After a 5-6 record last season, Oliver said he expects the offseason workouts to lead to improvements each year he coaches.

“I don’t know what people expected (out of the team last season), but the kids worked hard and competed, and as a coach, that’s what you want,” Oliver said.

“We expect them to do better each year, even though we’re losing a few key players. We’ll still be a little young, but we won’t be inexperienced.”

Since it’s going to be his final season as a Trojan, Brooks said he’s trying his hardest to set an example as a leader.

“I have to be better than I was last year,” Brooks said. “Right now, I’m trying to get my ACT score up and work hard every day to the best of my ability.”

With football being a year-round sport for the elite programs, Oliver said his team cannot afford to sit back and watch other teams get better.

“I always tell the kids, this is where football games are won and lost,” Oliver said. “It never stops. You maybe get two weeks off, then it’s back to work.” 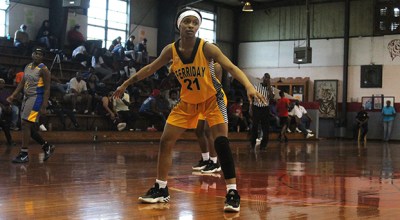