‘Get On Up’ filming turns back clock on Natchez streets

NATCHEZ — Despite the cold, rainy weather Monday, filming for “Get On Up” in downtown Natchez went well and hopefully with a minimal impact on shop owners, executive producer Trish Hofmann said.

Sun, Moon & Stars was closed Monday, but owner Erin Myers said she did not mind at all. Myers’ shop was converted into a television and radio repair shop for a movie scene. The store’s merchandise was shuffled around to make room for antique televisions and radios, Myers said.

Having their business closed the week of Black Friday, the biggest shopping day of the year, may have bothered some shop owners, but not Myers. 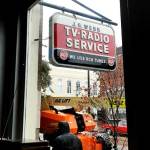 Ben Hillyer / The Natchez Democrat — Vintage signage hangs in front of Sun, Moon and Stars to transform the shop into a Tv and radio repair shop. 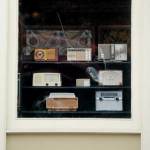 Ben Hillyer / The Natchez Democrat — Vintage radios were used as props to transform Sun, Moon and Stars into a TV and radio repair shop. 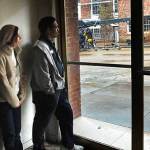 Ben Hillyer / The Natchez Democrat — Mickie Brown , Brittain Brown and Darnell Brown watch the filming of the James Brown biopic “Get On Up” on Franklin Street Monday morning. 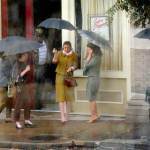 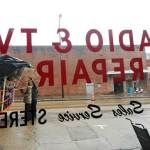 Ben Hillyer / The Natchez Democrat — Retro-style lettering helps transform Sun, Moon and Stars into a TV and radio repair shop. Crews in the background get ready to film a scene on Franklin Street. 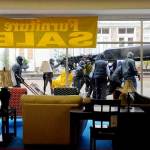 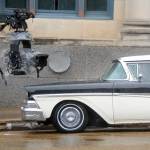 Ben Hillyer / The Natchez Democrat — The camera takes a closeup of an antique car parked on Franklin Street. 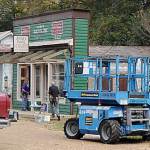 Ben Hillyer | The Natchez Democrat — Movie crews build a general store facade on the front of a building on Reynolds Street in Natchez near the Natchez City Cemetery. Builders were busy constructing doors, windows and signage. 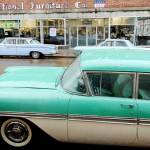 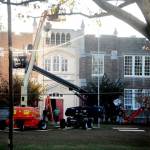 Ben Hillyer / The Natchez Democrat — Film crews for the James Brown biopic “Get On Up” were popping up in various sites around town this week. Crews were setting up lights and cranes for a scene at the Margaret Martin Performing Arts Center Monday evening. 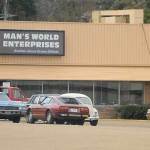 Ben Hillyer / The Natchez Democrat — A James Brown sign was created for Magnolia Mall and cars from the late 70s filled the parking lot for a scene Thursday afternoon.

And Myers said the cast and crew of “Get On Up” patronize her store.

“I’ve had several people shopping in here,” she said. “I sold one of my big paintings and several little gifts. Plus, they’ve bought tons of things for the movie here in town.”

Myers said she thinks it is important that business owners — and everyone else in Natchez — be accommodating to the movie’s cast and crew.

“If they’re happy doing this film here, they’re going to go back and tell more people about us,” she said. “And that’s bringing money into Natchez. These people go out and they eat, they shop, they stay in hotels and bed-and-breakfasts. They’re spending money all over town.”

Likewise, Hofmann said the film crew does its best to accommodate the needs of businesses when streets need to be temporarily closed for filming.

Hoffman said the production crew sends out letters to businesses that will be affected by filming and tries to stay in constant contact with shop owners, alerting them of temporary road closures because of filming.

“We also posted signs saying all the merchants were open (Monday),” Hofmann said.

The crew, Hofmann said, also made sure passers-by knew the shops were open,

“Often if we’re standing outside and we see somebody walking, we’ll say, ‘Go in and get out of the rain. Go in Turning Pages and buy a book,’” Hofmann said.

During the four hours of filming downtown, Hofmann said the crew filmed inside for scenes set in a bank for an hour and took a one-hour lunch break.

“So hopefully it was only a couple of hours (of business) that was impacted,” she said.

Portions of downtown on Franklin Street, between Pearl and Union streets, and on Commerce Street, between Jefferson and Main streets, were transformed for scenes set in 1942 Georgia and 1965 Cincinnati. The bank scenes were filmed inside the former City Bank building.

“We all got accustomed to the beautiful, warm weather here; we didn’t know what to think about the cold,” Hofmann said, laughing.

The scenes shot Monday could be filmed in rain or shine, Hofmann said, so the rainy weather did not pose a problem. For continuity’s sake, Hofmann said, it is important to start and finish a scene in the same weather.

“We’re sure it rained at some point during James Brown’s life,” Hofmann joked. “So it wasn’t a problem.”

Last week’s filming schedule was shuffled around because of the weather, Hofmann said. Turning Pages owner Mary Emrick said she was initially concerned filming scheduled for Wednesday would deter people from coming to a book signing at the store.

But then Emrick said she got word from movie officials that filming had been rescheduled,

“That helped me immensely with the book signing,” she said.

Crews will continue filming in Natchez through Dec. 20 before taking a break for the holidays and picking back up from Jan. 6 through 24 in Jackson.

The film, which is being directed by Mississippian Tate Taylor, who also directed the Academy Award-nominated film “The Help,” will depict Brown’s life from when he was nearly 5 years old in 1938 until he was about 60 in 1993.