Natchez fire fighter Thomas McGinty, was tightly lodge in the back of a SUV with the Jaws of Life as part of an emergency exercise. McGinty was trying to rescue a baby doll that represented an infant trapped in the wreckage. (Ben Hillyer / The Natchez Democrat)

NATCHEZ — Miss-Lou law enforcement agencies learned Tuesday that communication is key when dealing with any disaster, but especially one on the Mississippi River Bridge.

The local emergency planning committees of Adams County and Concordia Parish conducted a drill Tuesday morning involving a simulated emergency event on the bridge, which was staged in the parking lot of the Natchez Visitors’ Center.

In the simulated disaster, a bus carrying 30 people collided with an SUV while traveling on the westbound span.

Natchez Police Department Capt. Tom McGehee, who helped organized the event, said one main objective of the simulation was to see how law enforcement officials worked to split the eastbound span to allow for two-way traffic as medical personnel responded to the scene on the westbound span.

“What they need to think about is they’ve got all this traffic on both sides and how are they going to get everyone back and forth?” McGehee said. “But the other part of that is how do you get people to the middle of the westbound bridge to deal with the wreck?”

McGehee said the main challenge is the width of the bridge. 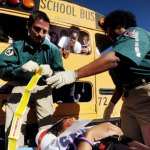 Metro Ambulance personnel Rosa Newman, right, and Wesley King attend to a student posing as a patient as other students watch from the bus wreckage. (Ben Hillyer / The Natchez Democrat) 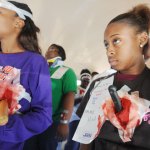 Fallin Career and Tech Center students Kelshundra Frye, left, and Angelika Whitley wear props that help demonstrate to emergency workers the extent of their injuries. Many like Whitley and Frye were noted as severely injured in a scenario that involved a school bus wreck on the bridge. (Ben Hillyer / The Natchez Democrat) 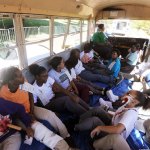 Students from Fallin Career and Tech Center sit in a bus waiting to be rescued. (Ben Hillyer / The Natchez Democrat) 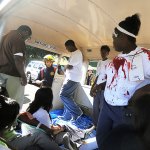 Natchez fire fighter Robert Arrington attends to some of the students in the bus. (Ben Hillyer / The Natchez Democrat) 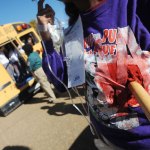 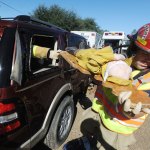 At left, Natchez Fire Department Lt. Dusty McIlwain removes an infant on a stretcher that had to be rescued using the “Jaws of Life.” The infant was in one of the cars involved in the fake wreck. (Ben Hillyer / The Natchez Democrat) 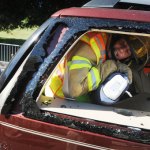 Natchez fire fighter Thomas McGinty, was tightly lodge in the back of a SUV with the Jaws of Life as part of an emergency exercise. McGinty was trying to rescue a baby doll that represented an infant trapped in the wreckage. (Ben Hillyer / The Natchez Democrat)

“Do you have ambulances and fire trucks go in head first and then back up the whole way or back up the whole way first, because there’s no way you can turn around one of those vehicles on a bridge that’s 24-feet wide,” McGehee said. “It was really interesting to see how everyone dealt with that situation.”

Medical personnel responded to the scene of the simulated disaster first, with one backing up the whole way to the wreck site and the other going in the wrong way. One ambulance eventually tried to turn around in the parking lot of the visitors’ center, which was blocked off by barricades to simulate the bridge.

“He would have smashed in the bridge trying to do that,” said McGehee, as he watched the ambulance attempt a three-point turn. “This is all stuff they need to be aware of.”

Natchez firefighters arrived shortly after and began tending to victims on the scene.

All the victims were students of Fallin Career & Tech Center who are enrolled in an allied health class designed to prepare high school students for a career in the medical field.

Eleventh-grade student Troyneece Jones played a victim who had fractured her leg in the wreck and needed medical assistance to get off the bus.

As medical personnel asked her questions about her symptoms, Jones said she got more and more excited about one day being a registered nurse.

“I got to see some of the things I want to do when I get out of school,” Jones said. “We do activities and stuff in class, but this felt like the real thing. It was amazing.”

Fallin student Jeremy Magee played the driver of an SUV involved in the collision. He was supposed to be trapped and unresponsive inside the vehicle, along with his fictitious wife and baby.

As Magee waited patiently for fire officials to rescue him from the SUV, he eagerly awaited a trip to Natchez Regional Medical Center to see how nurses and doctors would treat him for his injuries.

“I’m hoping this shows me if health care is really something I want to do,” Magee said. “This is more like real life than what we’ve done in the classroom.”

Natchez-Adams County Airport Manager Clint Pomeroy, who also helped organize the event, said the disaster drill helped uncover some key communication issues between law enforcement agencies on each side of the river.

Vidalia and Concordia Parish police as well as fire and medical personnel were expected to participate in the event in Natchez, Pomeroy said, but instead wound up creating their own simulation on the Vidalia Riverfront.

“One of the goals in all this was to see how well we could communicate with each other on each side of the bridge, because that’s something we always discuss,” Pomeroy said. “So one of the main problems in the drill was that we weren’t able to get anyone from over there to come participate over here.”

Wiley said the main issue with coordinating an event with law enforcement agencies on both sides of the river ultimately comes down to radio frequencies.

“We have different radio systems on the two sides of the river,” Wiley said. “So if I want to get in touch with a Natchez officer, I have to call my dispatch to call Natchez dispatch who calls the officer and relays my message.

“That’s something we need to work out, but it’s also not something that we can get done locally because it would have to be changed on the state level.”

Wiley said finding a way for Natchez and Vidalia officials to communicate is key if the departments hope to effectively respond to actual disasters on the bridge in the future.

Monday storms expected to give way to sunny skies for race

Sheltered by her umbrellas, Whitney Pearson rushes under a line of colorful balloons on display outside Darby’s on Main Street... read more