Storms knock out power in area

NATCHEZ — Nearly 2,000 people were without power in Adams and surrounding counties Tuesday as strong winds and heavy rain swept through the area.

At one point in the afternoon, nearly 325 Entergy customers were without power in Natchez and Adams County because of the thunderstorms and high winds. 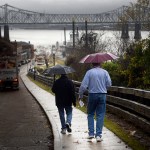 Chuck Jordan and Frank Prudent of Covington, Ky. walk down Silver Street in the rain towards the American Queen steamship Tuesday. (Sam Gause / The Natchez Democrat) 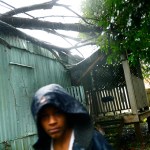 Xavier Jenkins, 14, walks around the back of the house on Ivy Lane he shares with his mother, Shantaya Jenkins, and brother and sister where a tree fell down on top of the house during the storm yesterday. Jenkins says he saw lightning hit the tree before it fell. The tree caused moderate damage to the inside and outside of their home. (Sam Gause / The Natchez Democrat) 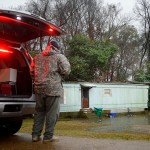 Emergency Management for Adams County director Robert Bradford responds to where a tree fell down on top of the house on Ivy Lane during the storm yesterday. Xavier Jenkins, 14, who lives in the house, says he saw lightning hit the tree before it fell. The tree caused damage to the inside and outside of their home. (Sam Gause / The Natchez Democrat) 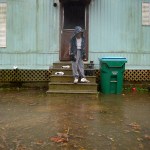 Xavier Jenkins, 14, stands on the porch of the porch of his family’s home during a storm Tuesday. (Sam Gause / The Natchez Democrat) 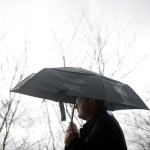 Chuck Jordan of Covington, Ky. walks down Silver Street in the rain towards the American Queen steamship Tuesday. (Sam Gause / The Natchez Democrat)

“We have brought in some contract crews during holidays like this,” Runnels said. “We’re working now to restore power as quick as possible.”

A majority of the customers had been restored by Tuesday evening.

The outages in the Meadville and Bude area impacted the majority of customers, and Runnels said those were caused by a major line being down in the area.

“There’s at least one line down across the highway that’s taken all that power out,” Runnels said. “We have units on site in the Meadville area working to get that fixed.”

The Miss-Lou was under a severe thunderstorm warning for a majority of the morning, as well as a tornado watch until late afternoon.

Quarter sized hail and wind gusts of up to 60 mph were reported in the area throughout the storm.

Downed trees were reported throughout the day in Natchez, including one that fell on an Ivy Lane house moderate damage to the inside and outside of the house.

Across the state, NWS meteorologist Latrice Maxie said there was some significant structural damage to homes and businesses reported in the Columbia area, about 40 miles east of Hattiesburg. A survey team will be dispatched Wednesday to determine whether a tornado was responsible, she said.

Gov. Phil Bryant issued a state of emergency Tuesday evening for Marion and Jones counties, along with other parts of the state impacted by severe weather.

A state of emergency is an administrative tool that authorizes the use of additional state resources to aid in storm response efforts.

Power lines are down along Mississippi 98 and authorities are urging motorists to avoid the area. There also are reports of flipped cars on the highway.

The Mississippi Emergency Management Agency is warning of flooding in low-lying areas.

The Associated Press contributed to this report.