NATCHEZ — Company officials with von Drehle officially broke ground on an expansion to the company’s Majorca Road facility that will represent a nearly $100 million investment by the time it is completed.

The company purchased the at-the-time shuttered Mississippi River Pulp plant in January 2013 and resumed the fiber recycling process there at that time.

Monday’s groundbreaking was for a promised expansion that will be used to house a paper manufacturing operation. 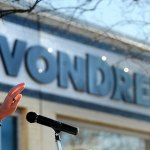 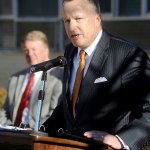 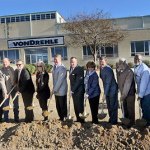 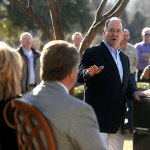 In this photo from 2015, Adams County District 1 Supervisor Mike Lazarus thanks the von Drehle family and company officials for their continued commitment to Adams County. (Ben Hillyer / The Natchez Democrat) 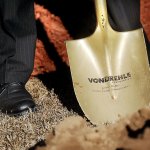 Commemorative gold shovels stamped with von Drehle’s logo and the date of Monday’s groundbreaking were used during the event. (Ben Hillyer / The Natchez Democrat)

“This has been an interesting two years for all of us,” von Drehle Chief Executive Officer Randy Bergman said. “When we purchased this a lot of people said, ‘We will believe it when we see it,’ and (now) look out there and you can see it.”

The expansion will support an additional 125 to 150 jobs at the plant, Bergman said. Von Drehle currently has 63 employees in Natchez.

The paper-manufacturing machine — which will be the only technology of its kind in North America — is currently being manufactured in Sweden, Bergman said, and the company hopes to have sellable paper coming out of Natchez by January 2016.

The machine will incorporate what is known as NTT-tissue technology, and will be able to produce 30,000 tons annually.

“To think that this technology is coming to this community is a wonderful thing,” Bergman said.

In addition to hiring for the paper manufacturing operation itself, the company will be looking to hire electricians, mechanics, and other support employees for the new operation in addition to more workers in the fiber reclaiming end of the business, Pankratz said.

Hiring will be done through the WIN Job Center at 107 Col Pitchford Parkway.

Bergman said the company will also be organizing the Natchez operation to serve as a best-practices facility for the company.

“There is a ramp-up period for these projects, and we are in the midst of that ramp up period here at von Drehle,” he said.

Natchez Inc. President Sue Stedman said economic development takes a lot of work from a lot of people, but that work was borne out Monday.

“They are going to continue to diversify our economic base and continue to stabilize the local economy,” she said.

Gov. Phil Bryant said in a news release Monday he is pleased with the progress the company has made.

“I congratulate the von Drehle team on this exciting event and look forward to watching the company thrive in Mississippi,” Bryant said.