Lee Carby lifts up her son, Walker, as she gives a tour of Greenlea to visitors from Minnesota. Lee’s in-laws Stella and Phillip Carby own Greenlea. The Carby’s have six grandchildren, and they are regular sights around the house. Antebellum houses like, at top from left, Elms Court, Greenlea and Lansdowne are lived in year-round. (Sam Gause / The Natchez Democrat)

NATCHEZ — If the walls of some of Natchez’s antebellum mansions could talk, they would tell fascinating stories.

And the house owners have seen — and heard — quite a bit, too.

Ornate porch facades, spiral staircases and well-preserved antiques may all be items of interest on pilgrimage pamphlets and brochures, but once tourists step through the front doors, most just have one question in mind — what is it actually like to live in an antebellum house? 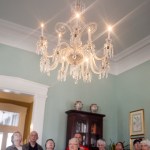 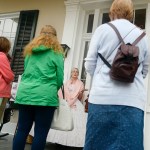 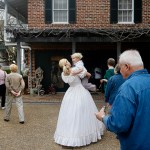 Lee Carby lifts up her son, Walker, as she gives a tour of Greenlea to visitors from Minnesota. Lee’s in-laws Stella and Phillip Carby own Greenlea. The Carby’s have six grandchildren, and they are regular sights around the house. Antebellum houses like, at top from left, Elms Court, Greenlea and Lansdowne are lived in year-round. (Sam Gause / The Natchez Democrat) 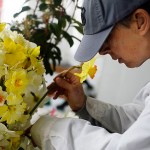 Elms Court owner Anne MacNeil places a flower into one of the bouquets that she and senior gardener Otis Lewis, not pictured, make from flowers taken from her house’s gardens. (Sam Gause / The Natchez Democrat) 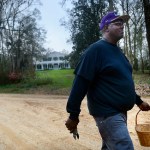 Elms Court senior gardener Otis Lewis walks down the house’s driveway to look for hyacinths for a bouquet that he is working on. Lewis has worked at Elms Court for 37-years. All the flowers that are used in arrangements through Elms Court were taken from the house’s gardens. (Sam Gause / The Natchez Democrat) 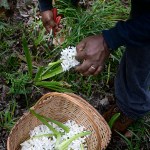 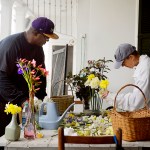 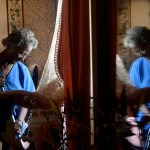 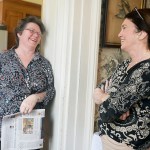 Lansdowne owner Marsha Colson, left, laughs with her sister and fellow owner Lisa Baker in the middle of preparing the house for a dinner that they were hosting for tourists later in the night. Colson lives in Lansdowne fulltime and Baker comes up from Baton Rouge regularly to help and keep her sister company. (Sam Gause / The Natchez Democrat) 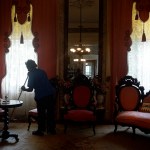 Gloria Johnson sweeps the floor inside Lansdowne. Johnson has been working at the house since she was a teenager and her mother worked at the house before that. (Sam Gause / The Natchez Democrat)

“I let people know that this isn’t a museum — it’s my home,” said MacNeil, who is the fourth generation owner of Elms Court, located off John R. Junkin Drive, tucked behind sprawling oaks and lush gardens.

MacNeil’s great-grandfather purchased the property in 1895 and since, MacNeil said, a family member has lived in — and maintained — the elaborate two-story house, known for its cast-iron grillwork and terraced gardens.

“Before the home had electricity, my grandfather used to have evening parties during pilgrimage and light candles everywhere,” MacNeil said. “And, the story goes, that one night a tourist attended the party and said, ‘Why, there must be a thousand candles in this house.’”

The story must have stuck, MacNeil muses, because Elms Court has been known as the house that hosts “the ball of a thousand candles” since.

And while Elm’s Court hasn’t boasted a hundred — let alone a thousand — candles in some years, MacNeil said she likes to keep the gracious hospitality alive in her own way.

“We called the party ‘ragtime to swing,’” MacNeil said. “It had a feeling of intimacy, like a party that would have been hosted in the past.”

With tables set up in the house’s drawing rooms and piano music drifting through the halls, MacNeil said the house was really able to come alive for visitors.

“One year during a tour, the fireplace in the billiards room started smoking,” MacNeil said. “With the air-conditioning fans blowing, smoke just blew all throughout the house and set off the smoke alarm. The fire department ended up being called.”

At the time, MacNeil said she was embarrassed by the mishap. Now, looking back, it’s one of her favorite pilgrimage memories.

“To some extent, (pilgrimage) is a big performance,” MacNeil said. “I’m not an actress, but I do have a script every year and sometimes things go off the script.”

And while there is always the occasional nosey visitor who peeks behind doors labeled “private,” MacNeil said she cherishes being a part of one of Natchez’s most time-honored traditions.

“Pilgrimage is deeply ingrained in me,” MacNeil said. “This is my family home, and what I want is for visitors to feel like they’re guests in my home.”

When tourists aren’t mingling through Lansdowne’s grand rooms outfitted with antique furniture, you’re likely to find the house’s owner, Marsha Colson, preparing for the next batch of visitors.

Between cleaning antique poster beds, dusting behind drapes and shining silverware, being a part of Spring Pilgrimage is no easy feat, Colson admitted.

“It’s like having friends over. I just don’t know who they are until they get here,” Colson said.

Lansdowne, located a mile outside the Natchez city limits, is revered for its Georgian revival architecture and extravagant furnishings, which are mostly all original to the house.

Keeping all of those assets clean and intact, Colson said, it a year-round job.

And when she cannot scrub every floorboard and weed every flowerbed, Colson said longtime friend Gloria Johnson arrives to provide a helping hand.

“I take one room at a time,” Johnson said of her cleaning strategy. “The most difficult thing to clean, by far, is the poster bed.”

Since Johnson was a teenager, she has been working at Lansdowne off and on; making sure the house is in tip-top shape for its annual debut.

“I don’t think there is a photo I haven’t dusted, or a curtain I haven’t cleaned in this home,” Johnson said with a smile. “Between all the brass, silver and woodwork — there’s a lot.”

Colson, who lived at Lansdowne as a child, then moved to California in 1968 before returning to the home for good in 2001, said growing up in an antebellum mansion has its quirks.

“Back in the 1950s and ’60s, there weren’t so many international tourists, but people still came here from all parts of the country for pilgrimage,” she said. “It was as if the world came to us.”

Today, Colson said she’s not surprised when she hears multiple languages spoken during tours. Off the top of her head, Colson said tourists from Germany, Australia and Japan have all visited Lansdowne this year.

Once Colson asked an English tourist what drew them to Natchez. Their answer struck a chord with her.

“He said, ‘Overseas, you might have to travel for days to see multiple homes like this. But in Natchez, they’re all condensed in this pretty little town overlooking one of the greatest rivers in the world,’” Colson said. “How lucky are we to have that?”

And even though Colson has lived outside the South and known a life that didn’t involve hoop skirts and Southern accents, she said she wouldn’t trade living in an antebellum house for anything.

“This house is like a collage of all the people who have lived here, and that for me is very comforting,” Colson said.

For 15 years, Stella and Phillip Carby have called Greenlea — a Greek revival townhome situated in downtown Natchez — their home.

Before Stella was born, though, her family was hosting spring pilgrimage tours.

“I grew up in this tradition, so it doesn’t seem strange at all,” Stella said. “I’ve been a part of these tours since I could walk.”

Stella grew up in antebellum Hawthorne.

Like other pilgrimage homeowners, Stella said almost everything is cleaned — top to bottom — to prepare for the thousand or so tourists who parade through Greenlea every year to get a glimpse of the “old South.”

And Stella admits, to mentally calculate all the expenses that go into pilgrimage preparation might cause her to rethink her involvement in the annual house tour, as a large bill is usually involved.

“Nobody requires that we spend any money to do this, but keeping the home updated, especially an older home like this one, can get expensive,” she said.

Just like any other business, pilgrimage involves a high amount of organization and preparation.

When the weather doesn’t cooperate, or tours fall through, Stella said “the pilgrimage business” feels the negative effects.

“This year, we had a lot of rainy days in the opening weeks of pilgrimage, which caused the numbers to not be all that great,” Stella said. “But we’ve been seeing it pick up now.”

And when Greenlea isn’t on tour, Carby said it’s not uncommon to see children’s toys strewn about the grounds, as her six grandchildren are known to pay frequent visits to the historic house.

“Tourists are always really surprised that we live here,” said Stella, adding that being a part of pilgrimage in a lot of ways is like being an unofficial Natchez tour guide. “My main reason for being a part of (pilgrimage) is wanting to see Natchez grow. And if that involves opening my home to the tourism industry, then that’s something I can do to help that.”

NATCHEZ — When the inmates charged with planning to kill a prison guard during a violent prison riot at Adams... read more