There is no place like Relay: Teams keep up the fight

Participants in the 2015 Miss-Lou Relay for Life walk around the track into the night. The event raised approximately $35,000 that will go to support cancer research. (Sam Gause / The Natchez Democrat)

NATCHEZ — Staying out past bedtime isn’t for the faint of heart.

But several 2015 Relay for Life teams motivated one another to pull through Friday night at the Concordia Recreational District 3 Complex, not for the sake of who can stay up longer than the other, but to support those who have been affected by cancer.

Thirty-five teams participated in Relay this year. While some teams called it a night early, others stayed up to participate in fun games and activities to cheer on cancer survivors.

Team Metro Ambulance has participated in the cancer-fighting event for 10 years, staying out until the break of dawn. 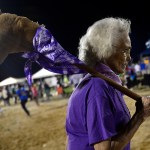 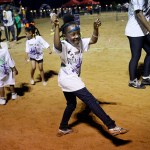 Zoey Collins, 6, right, dances to V.I.C’s “Wobble Baby” while walking around the track during the 2015 Miss-Lou Relay for Life. (Sam Gause / The Natchez Democrat) 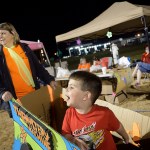 Our Lady of Lourdes Catholic Church team members Cole Butler, 3, and Melody Fuqua drive around the team’s Mystery Machine as they dressed up like characters from Scooby-Doo. (Sam Gause / The Natchez Democrat) 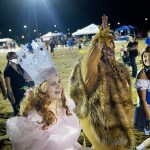 Metro Ambulance team members, from left, Lillian Pugh, Trenton Pugh and Brandi Lipsey walk around the 2015 Miss-Lou Relay for Life track while dressed as characters from “The Wizard of Oz.” (Sam Gause / The Natchez Democrat) 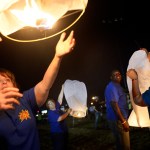 Concordia Bank and Trust team member Michelle Bozeman, left, releases a sky lantern dedicated to someone with cancer while Kenny Stewart and Mary Montpelier prepare another lantern to release during the 2015 Miss-Lou Relay for Life. (Sam Gause / The Natchez Democrat) 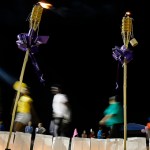 Participants in the 2015 Miss-Lou Relay for Life walk around the track into the night. The event raised approximately $35,000 that will go to support cancer research. (Sam Gause / The Natchez Democrat)

Trenton Pugh, a paramedic with Metro Ambulance and team captain for eight years straight, stayed out past 2 a.m. with his team to honor his sister, Terri Wilson, who is a 10-year breast cancer survivor.

“Just to see the survivors keeps us going,” Pugh said. “That’s why we will wear these uncomfortable, hot costumes and stay out to put up decorations. We want to show our support.”

All it took was three clicks of a heel for Team Metro Ambulance to sport costumes from “The Wizard of Oz.”

Pugh took on the persona of the Cowardly Lion, while his mother, Lillian Pugh, portrayed Glinda the Good Witch of the North.

“It’s a party with a purpose, Pugh said. “We always want to outdo ourselves from the previous year.”

Concordia Bank & Trust participated in the Relay as well, transforming from ordinary people by day to cancer fighters by night.

Julie Wagoner, who is the executive secretary to the president at Concordia Bank & Trust, said the team set up a black back-drop of a city, with a shining bat signal turned cancer signal.

This theme will keep the group motivated to keep pushing to end cancer, Wagoner said.

Concordia Bank & Trust stayed out past midnight to support survivors who laced up their shoes and walked the survivors lap in the center of the complex.

Tracie Gray, an employee of Concordia Bank & Trust, said the group’s main concern is placing their hearts in the right place.

“We think about who we are doing this event for,” Gray said. “They are fighting a tremendous battle. This is one way, one night, that we can take a stand and endure what they are going through.”

Finding a good theme with a good motive helps the group stay out as long as possible, said Bridgit Martin, who served as the team captain.

The Lady of Lourdes Catholic Church stayed out past 10 p.m., but the group once stayed out much longer in previous years, where they took in plenty of caffeine and junk food to stay awake and support their loved ones.

“We have friends who have lost their life to cancer,” Martin said. “Staying out here allows us to support them.”

Cancer survivors Janie and Roy Reyes hold hands while walking in the survivor’s walk of the 2015 Miss-Lou Relay for... read more