FERRIDAY — Ouachita Christian School has steamrolled through a district that has had three teams break the Top 10 in the Louisiana High School Athletic Association Class 2A polls.

With a perfect 4-0 district record and 8-1 overall record, the Eagles travel to (5-4, 2-2) Ferriday High School for the final game of the regular season against a Trojan bunch that’s gaining confidence.

“We have to build on last week, step up and play well,” Ferriday head coach Dwight Woods said.

The Trojans are coming off of a 28-26 win against Mangham after falling to Sterlington High School by three points the week prior. Woods said his front seven on defense led the way.

With the sloppy weather forecast for tonight’s game, Woods is looking for another big game out of his defensive line going against a big OCS offensive line.

“They’re probably the biggest team we’ve faced since Washington-Mario,” Woods said. “Their offensive line, all of these guys have been together except one kid for three straight years. They play together as a unit.”

Behind that big offensive line is running back Josh Pennebaker, who has rushed for more than 1,500 yards this season and 19 touchdowns. OCS has provided a spark through the air, as well, with Grant Fitzhugh completing 66 percent of his passes for 1,542 yards and 20 touchdowns.

On the opposite side, Woods is looking for running back Milak Hampton to have a big day on the ground with the heavy rain expected.

“I think we’ll be able to run the ball successfully,” Woods said. “We’ll have opportunities to throw down the field, and we’re going to need to take advantage of that.”

Ferriday will host OCS at 7 p.m. at Melz Field. 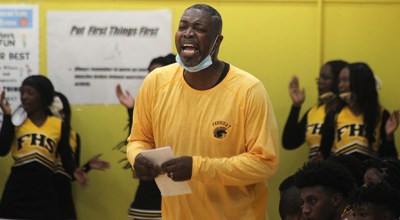