FERRIDAY — Devion Dunbar let a three-point shot go as the buzzer sounded, and just like it had so many times before in the game, the shot found the bottom of the net for the Sicily Island freshman.

Dunbar scored a game-high 34 points, and Sicily Island was able to keep Ferriday at bay in a 65-49 win.

“It was a pretty good game,” Sicily Island head coach Curtis Shavers said. “They came out wanting to play tonight.”

Having to deal with a significantly larger team in Ferriday, Shavers said the Tigers came into the contest with a specific game plan.

“We had to pressure them as much as possible and try to intimidate their big guys with traps and such,” he said.

The teams were tight through the first quarter, with Ferriday having a one-point edge at 13-12. However, the Tigers would double up the Trojans in the second quarter to take a 28-21 lead into the half.

Sicily Island then blew the game open with a run to start the second half, eventually leading to a 14 point lead.

The Tigers held Ferriday to just five points in the third quarter.

“In the second and third quarter, we couldn’t get back on track and got frustrated,” Ferriday head coach KG Watkins said. “We kept making bad passes and had too many turnovers and bad decisions.”

Ferriday was able to score 23 points in the fourth quarter, but it wasn’t enough as Sicily Island kept pace at 18.

Watkins said a problem the Trojans had was getting away from fundamental team basketball.

“(Dunbar) is a good basketball player, but we can’t let one man dictate what we do,” he said. “We can’t sit back and get frustrated over one particular player. We still have to play team ball, and we got away from that concept.”

Watkins said he isn’t pushing the panic button yet, especially after recalling what happened for the Trojans not long ago.

“When we made our championship run in ’08, we didn’t actually start winning until after Christmas,” Watkins said. “So it is OK right now. Yes, it would be great to have a spurt right now, but I’d rather take it after Christmas when it counts. Hopefully, this is still a learning phase and we’ll see if we can get better day by day and make it work.”

Leading scorers for Ferriday in the game were Dantrieze Scott with 11 points and Dare Rosenthal with 10. 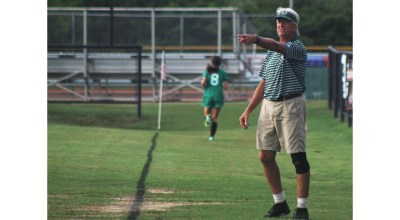