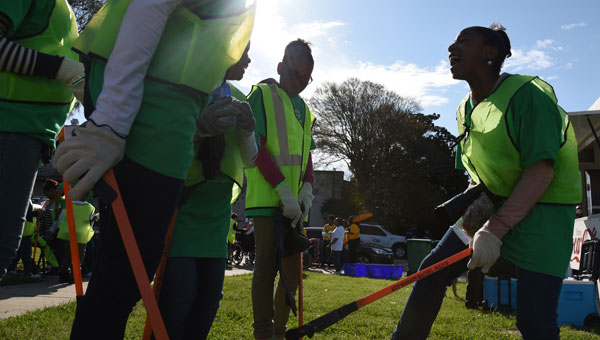 Maya Lewis, 10, laughs with fellow Girl Scouts in her troop during the Keep Mississippi Beautiful Great American Cleanup kickoff Saturday. Volunteers picked up litter around Natchez and participated in landscaping projects at the colonnades and other areas. (Nicole Hester/The Natchez Democrat)

NATCHEZ — Picking up trash isn’t normally how Diara Calcote and her friends would spend their Saturday, but as it turns out, cleaning up Natchez was actually quite fun.

“I like walking and hanging out with my friends,” the 10-year-old said. “We just want to make Natchez beautiful.”

As an added bonus, Calcote and her friends got to meet and take a photo with First Lady of Mississippi Deborah Bryant, who joined volunteers for Keep Mississippi Beautiful’s Great America Cleanup state kickoff Saturday.

“Natchez is such a beautiful city,” Bryant said. “Natchez is a city that depends so much on tourism, so it is important to keep the trash out of the street. You want to make a good first impression, so you can keep people coming back.”

Mayor Butch Brown, who was previously involved in the campaign as the state’s transportation director, stood up out of his wheelchair to comment on how important the day is to the area.

“It was one of our focal points,” he said. “I hope it is something that keeps getting bigger and better every year.”

Look Around Mississippi’s Walt Grayson was on the bluff recording the kickoff with his video camera.

“Twenty years ago I was in St. Petersburg, Russia, and I noticed how clean everything was,” he said. “Then I noticed that the police officers carried submachine guns.”

Grayson said he noticed the same situation when he was in Munich, Germany.

“In lieu of allowing Natchez’s police officers to carry submachine guns, maybe we can just not throw the trash out the window,” Grayson said with a laugh.

“We like to commit random acts of kindness,” she said, smiling. “The more people see everyday people picking up garbage, and not people with waste management, it may make them think twice about throwing that trash out.”

Also cleaning up along the St. Catherine Street route was Rose Anderson, Natchez-Adams School District staff accountant. Anderson said cleaning up the city served as its own reward, but more than that, it was important to get the students involved.

“Being out here like this teaches them a lot,” she said. “They learn how to keep their community safe and clean.”

“We are cleaning up St. Catherine Street so it doesn’t have to look so nasty,” she said. “We want to keep Natchez clean and beautiful.”