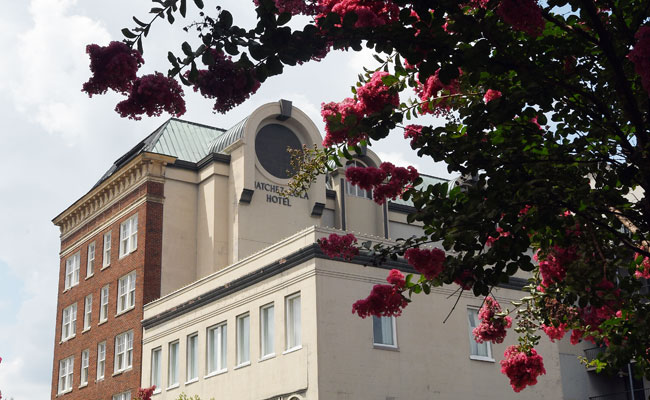 An economic development announcement is scheduled to take place Thursday morning near the Eola Hotel on Pearl Street. (File photo | The Natchez Democrat)

NATCHEZ — Construction on the former Eola Hotel has been delayed by damage to the building, but work is expected to begin this fall.

The historic Eola Hotel was purchased in 2014 by Virginia attorney Robert Lubin. His plans to renovate and transform the building into senior-living apartments were approved by the city in April, but construction has yet to begin.

“You know the amount of time it took to get all the applications we needed and work with the City of Natchez to get what we needed to do and what Natchez wanted us to do and make sure we meet all the codes,” Lubin said.

A draft of the construction plan was first presented to the Natchez Planning commission in January and received final approval in April.

Construction should begin in September or October, Lubin said.

The local attorney representing the Eola project, Tony Heidelberg, originally presented the plan for the first floor to the Natchez Planning Commission in January, but the application was rejected because it did not include enough publicly accessible space on the first floor.

Heidelberg appealed to the Natchez Board of Aldermen in March, intending to present a plan that showed a 100-percent accessible first floor but was asked to re-present the new plan to the planning commission instead.

The commission approved the plans in April.

Heidelberg said storm and water damage that occurred during the application process caused delays in the renovation.

“A lot of (the schedule) had to be moved because of the condition,” Heidelberg said.

In March, a portion of the exterior wall fell into the Eola’s courtyard after two days of heavy rain and winds.

Though the property was inspected before plans were drawn up and presented to the city, re-inspections were necessary to ensure safety and efficiency of the renovation, Heidelberg said.

Lubin said the project is now back on track and is in the process of receiving EB-5 funding.

Private foreign investors are financing the restoration of the Eola Hotel through a government program known as EB-5, or Immigrant Investor Program.

Established in 1990, the program was created to stimulate the U.S. economy through job creation and capital investment by foreign investors.

In return for their financial ventures, investors are granted permanent U.S. residency by way of a green card.

“We are more than halfway through the process of our documentation,” Lubin said. “We would expect to be funded by the end of this summer, and we’re looking to start construction in September or October.”

Mayor Butch Brown said he is confident that when the renovations are complete the building will continue to be an important asset to the city.

“It appears as if the building will not be a hotel, but it will house people who will be here spending money,” Brown said. “Bob Lubin loves that hotel as much as anyone. I have all the confidence in the world that he will do the project and that it will be a quality project worth waiting for.”