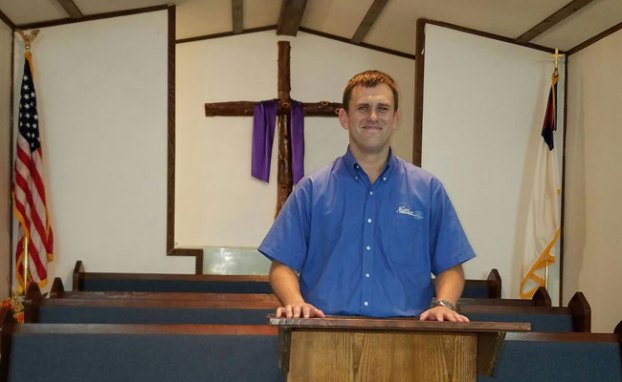 The Rev. Bryan Kyzar recently became a minister and is now leading the congregation at New Hope Baptist Church in Roxie. (Morgan Mizell / The Natchez Democrat)

ROXIE — A little more than a year ago, Bryan Kyzar and his family came to New Hope Baptist Church in Roxie at the request of his sister-in-law, and today he is the minister.

“When we got here, there were probably about six or seven members,” Kyzar said. “Today, we average about 30 to 40.”

Kyzar and his wife were attending Parkway Baptist Church prior to the move.

“We were not looking for a change,” Kyzar said. “My wife, Tiffiany, was teaching a Sunday school class, and we were happy where we were, but when the Lord calls you to do something, you listen.”

Not being a minister, Kyzar found online courses through Universal Life Church were his best fit for studying to become an ordained minister while continuing his job as the Service Manager at Natchez Ford.

“I work a full-time job,” Kyzar said. “ I spent a lot time studying and reading after my family went to sleep. I still do this today when I am working on my sermons.”

Although the congregation grows, Kyzar does the traditional duties of a minister such as visiting those in the hospital and nursing homes.

“It would be wonderful if this was my full-time position,” Kyzar said. “That would allow me more time to spend with each person I need to visit.”

Kyzar puts all of the events of the past year in God’s hands.

There was no children’s ministry when Kyzar and his family arrived, but his wife quickly set to work to change that fact.

“When we got here there were no kids and no ministry for kids and we have a son, James, and I knew I would have to do something about that,” Tiffiany Kyzar said. “I work three to four days a week, but I now have Sunday lessons planned, and we have done vacation bible school and we are getting ready to do it again.”

Working as a team has solidified the bond between Bryan Kyzar and his wife.

“I am so proud of him, but I would be proud of him no matter what,” Tiffiany said. “I know his heart, and I am just glad to see him being the man God wants him to be.”

Some of the upcoming events for New Hope include, vacation Bible school, which will start with a kick-off at 4 p.m. Sunday; the reintroduction of fifth Sunday singings; a revival in October and a homecoming in October. There are also plans for the construction of a new fellowship hall.

While the days and weeks are full, both Bryan and his wife are excited and hopeful for their future with the church and as a family. The couple expect the birth of their second child in a few weeks.

Right now, the church only has an 11 a.m. Sunday morning service. Anyone looking for more information about the church and their upcoming vacation Bible school can find them on Facebook at New Hope Baptist Church.

Natchez Fire department crews responded to an accident on US 84. The one car wreck required the Jaws of Life... read more