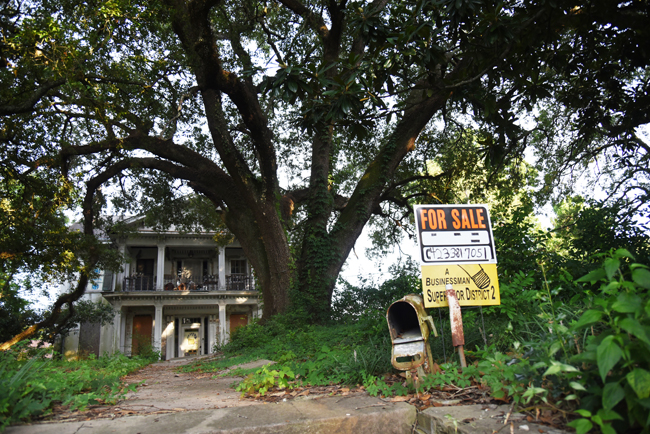 A view of the historic house Melmont on North Rankin Street Wednesday in Natchez. (Nicole Hester / The Natchez Democrat)

NATCHEZ — The owners of one of the state’s most endangered historic mansions have until October to submit to the City of Natchez plans to stabilize the house.

The Natchez Preservation Commission recently set a 90-day deadline for Frances Oberlin Stephens and Sam Oberlin, who own Melmont, which was placed on the Mississippi Heritage Trust’s most endangered historic places list in October 2015.

If plans to stabilize the house are not submitted before the deadline, the commission could file misdemeanor demolition by neglect charges against the owners.

City Planner Riccardo Giani said he does not think it will come to that.

“The owners are being very cooperative, and we are working toward a positive solution,” he said.

Giani said Joseph Stephens has consulted a structural engineer and is getting bids from contractors for work to be done on the house. Giani said he also advised Stephens to work with the Historic Natchez Foundation to ensure any work to the house was in keeping with its historical character.

HNF Executive Director Mimi Miller said estimates indicate work to stabilize the house would cost approximately $200,000. That work would have to be done before restoration could begin, Miller said.

Giani said the major concern with the house is the section that is crumbling.

“If that brick wall falls, half of Melmont will fall,” he said. “It is a significant structure element, and if that falls … it may send it to the point of no return.”

Giani is optimistic, though, about the future of Melmont.

“Mr. Stephens has been very cooperative, and I feel like he does care a lot about this,” Giani said. “I look forward to working with him to save this important historical resource.”

Architect James McClure built Melmont in 1855 for Col. Henry Basil Shaw and his family. The name of the property was derived from the initials of Shaw’s wife, M.E.L. — Mary Elizabeth Lattimore. Mont comes from the French word for mountain, as the house is located on a hill.

The house has sat vacant for several years.

The Mississippi Heritage Trust placed the house on its 2015 list of the 10 Most Endangered Historic Places in Mississippi. The trust is a non-profit organization that supports historic preservation efforts throughout the state.

Historic Natchez Foundation nominated Melmont to be on the list.