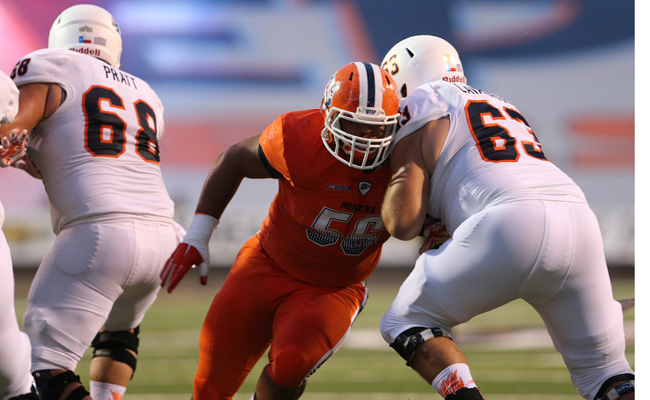 University of Texas at El Paso defensive tackle Donavan “Sky” Logan attempts to make a tackle during a game played last season. Logan is entering his redshirt-junior season for the Miners and is attempting to build off a 2015 campaign during which the former Trinity Episcopal star recorded 29 tackles, five tackles for loss and three sacks. (Photo courtesy of UTEP Athletics)

University of Texas at El Paso defensive tackle Donavan “Sky” Logan has high expectations for himself this season.

“My goals this year are to get 10 sacks and 50 tackles,” the former Trinity Episcopal star said.

Logan perhaps has earned the right to place strong expectations as the redshirt-junior proved last season he is more than capable of playing at a high level.

The 6-foot-2, 285 pounder played in 10 games last season for the Miners, starting eight of those contests. Logan finished with 29 tackles, five tackles for loss and three sacks.

“I remember my first game,” Logan said. “I didn’t start that game, but I had a sack and three tackles.’

Yet things always haven’t gone smoothly for Logan, who signed with UTEP after spending two seasons at Hinds Community College, where he played just two games his sophomore campaign before suffering a season-ending leg injury.

Following the injury, Logan said he had to endure and adjustment period when he transferred from Hinds to Division I program, and it wasn’t until he showcased his talents on the field that he finally felt he was earning his way.

“It was tough after getting injured,” Logan said. “I had a pretty rough spring, mostly because of the injury. I’d probably say when the season started I was finally 100 percent, but the coaches didn’t know that until they put me in the game. Then, it took off from there.”

Another year removed from the injury, Logan’s confidence has blossomed and helped mold him into the player he has become today.

“My moves feel good; my pass rush moves feel good right now,” he said. “They expect me to go out and make plays, cause penetration, get sacks, knock balls down, force fumbles and all of that. I’m definitely looking forward to it and being a leader this year.”

Logan has not only placed high expectations on himself, but on his team as well.

Despite a 5-7 campaign in 2015, Logan said he thinks the Miners can accomplish a great deal this season.

“We can make history here at UTEP,” he said. “I think we could win the conference, even over the home-state team (University of Southern Mississippi). We have been getting along better as a team, and we’re just playing for each other. I think that’s going to lead to us having a great season this year.”

UTEP kicks off its season Sept. 3 when it hosts New Mexico State.

“I think the whole team is ready to go,” Logan said.