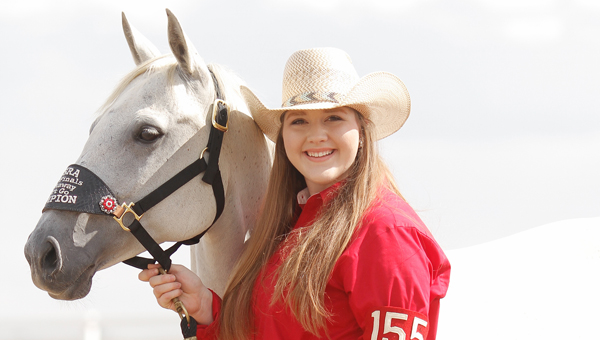 “You can call it fascination or love,” Hudspeth said. “Both of my parents liked to be around them, but they never did rodeo. My sister and I are first generation cowgirls.”

Hudspeth said she got her first pony at 3 years old, and she has been training in rodeo roping events since she was 7. Hudspeth’s horse, Lilo, is the half sister to the horse Hudspeth’s older sister works with.

After 13 years of training, Hudspeth and Lilo got to compete in a rodeo on a big stage. The two traveled by truck and trailer to Gillette, Wyo., to compete in National High School Finals Rodeo’s premiere event.

Hudspeth said there were approximately 1,600 cowpokes from nearly every state, several Canadian provinces and Australian territories.

“I expected the facility to be big, but not that big a crowd,” Hudspeth said.

Hudspeth, a Jonesville native, represented Mississippi in the breakaway roping event — the female version of calf roping, in which the cowgirl doesn’t get off the horse to tie the calf’s legs together.

Hudspeth said she represented her home state in rodeo competitions for the past four years, but decided she wanted a different competitive experience as a senior at Harrisonburg High School.

“My senior year I wanted to change it up, and we really enjoyed it,” Hudspeth said.

Hudspeth said she placed fifth in the first performance run and seventh in the second run. She placed 27th in the overall competition, missing the top 20 by .6 seconds.

“The girls really brought it this year,” Hudspeth said.

Hudspeth and her family drove to Wyoming and back on a 16-day trip. Traveling with Lilo meant she had to monitor the horse, find a stall for her to sleep in and let her exercise.

“You pretty much stop wherever there is a stall,” Hudspeth said.

Hudspeth is heading to Harding University in Searcy, Ark., when she plans to participate in open events while attending school.

“Its kind of sad but it was a good way to end (my high school career),” Hudspeth said. “I raised the Lilo for 13 years, so its not the end.”