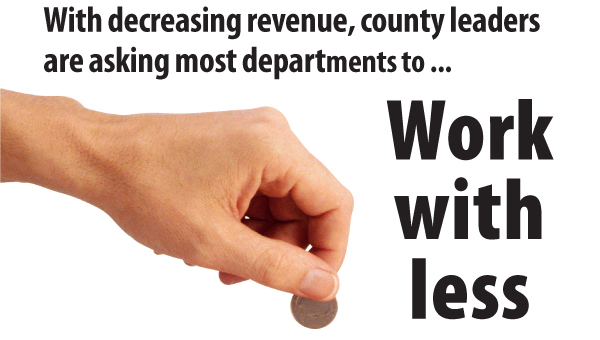 NATCHEZ — When crafting the next fiscal year’s budget, Adams County supervisors are mostly asking, “What do we need?” instead of “What do we want?”

The board has begun its annual planning sessions in advance of adopting a new budget — a process that has to be completed by the end of the fiscal year, Sept. 30 — and has met with most departments to hear their funding requests.

While one county department will be receiving more after making its case to the board, the rest of the county’s operations will likely have to do with less.

“We didn’t gain any revenue this year — we actually lost revenue,” Supervisors President Mike Lazarus said. “We have cut every budget except the (Adams County Sheriff’s Office) thus far.

“The main thing is — just like always — to get the sheriff what he needs to keep everybody safe and get the road department what they need to keep the roads in working shape.”

Final counts for how much revenue the county will receive for the current fiscal year will not be in until after it closes, but projections have the county coming in short on its budgeted $25,584,570 revenue for the 2016 year, of which 58.96 percent was ad valorem taxes, and the remainder composed of revenue streams — among others — such as oil and gas severance, gaming collections, fees and fines.

District 4 Supervisor Rickey Gray said with that in mind, that is why he felt it was important for each department head to start making their cases along with budget requests instead of taking an up-or-down vote on a pre-packaged proposal.

“When you bring those department heads and elected officials in, I thought it was very important for me as a new supervisor and (new Chancery Clerk) Brandi Lewis to have them in front of us and to have the chance to talk to them instead of just readopting the budget from last year,” he said.

“It is a learning experience, but the good thing about it is it is not my first time dealing with a budget, which I did as a member of the Natchez Board of Aldermen.

“I am kind of a little up to speed on how to deal with a budget. My philosophy over there — and now with the supervisors — was let’s build from the bottom up. We don’t need to start from where we were last year and add on, because some things you needed last year you don’t need this year.”

District 3 Supervisor Angela Hutchins said the board’s goal has been to make cuts at every department that can add up enough to make the difference needed without increasing the revenue burden on the taxpayers.

“We are trying to make sure we don’t have a tax increase, and that is why we have been dealing with cuts,” she said.

Some of the cuts Hutchins mentioned are responding to changes in market conditions, while others may amount to logistical moves that ensure county offices stay efficient.

“One of the cuts, for example, was with gasoline,” she said. “We have cut that some since the price of gas has gone down, and we are also looking at cutting some of the travel.

“We are also trying to see if we can consolidate and have all of the office supplies go to one place, and then (departments) have to check out office supplies that they need, as well as office equipment and furniture.”

District 2 Supervisor David Carter said when looking at county budgets, “there is always room to cut.”

“It is just important to make sure we cut what is unnecessary. Most department heads — everybody — needs more, but our job is to figure out how to do more with less,” he said.

“There are small things we need around the county, but we can’t afford everything we need. Unfortunately, everybody needs to suck up the belt a little to get things done.”

District 5 Supervisor Calvin Butler said that even with revenues where they are, the budgeting process has gotten easier with time. This year will mark the fourth budget he has been a part of approving.

“I have more knowledge and know what to look for, and I know what things are major and what aren’t major issues,” he said. “I’m a compassionate guy, and when I first came in people would say, ‘I need this,’ and I would be inclined to say, ‘Let’s help them out,’ but sometimes they are asking for more money just because they can get it. I can ID those things a little better than I did at first.”

The good thing about this year’s budget is that, even though money is tight, it shouldn’t cost the people of Adams County more to keep the government operating at its current state, Butler said.

“At this point, with what we are going through, I don’t see the possibility of raising taxes for anything,” he said.

The overall expenses should be down to reflect the decrease in revenue, Lazarus said, and even if the shortfall exceeds projected expenses, the county can lean back on its cash balances.

“I wouldn’t raise tax millage just to have a $2 million cash balance,” he said.

While no tax increase is on the table right now, Lazarus said he has asked the other board members the possibility of at some time in the future dedicating two mills to county road work.

“I have asked the other supervisors if they will consider raising a couple of mills and dedicating it to blacktopping, because the state is not going to help us,” he said. “I have never been big on raising taxes, but I think if you do something that people can see, I don’t think they mind as much.”

Butler said he would consider a dedicated tax millage for roads, but it would be “nothing but for roads.”

“Part of our job is roads and bridges, so I wouldn’t have a problem with that,” he said. “I have a lot of bad roads, a lot that have been neglected over the years and need attention, and if there is a way for us to start an annual road maintenance program like we have in the city, I would be for that.”

Even if the road discussion formally comes up in the next couple of weeks, the board isn’t resolved as a whole at this point to pick up the road issue.

“We desperately need to focus on the road system in Adams County, but I am not ready to (raise taxes) on that yet,” Carter said. “Next year we have a lot of debt coming off the books, and I would rather see us pay some debt and continue those payments as road improvement.

“But at this point, right now, it is hard to say anything until we are out of the middle of the budget cycle.”

The county government by law will have to host a public hearing before the budget can be adopted. The hearing has not yet been scheduled.

Local students heading back to school