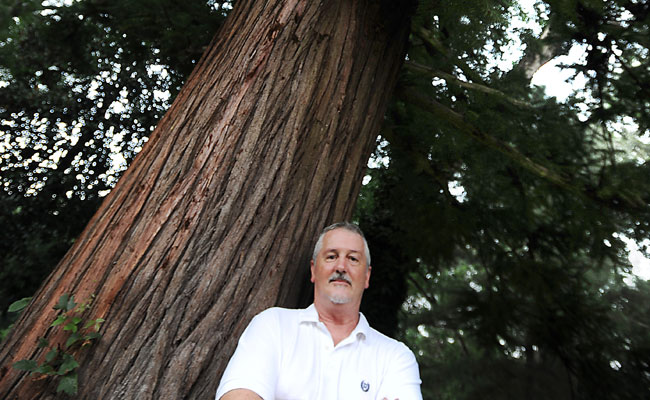 Ben Hillyer/The Natchez Democrat — Mac Blackwood stands next to the trunk which was measured at 116 inches in circumference.

NATCHEZ — It’s clear the tall coniferous tree on the Blackwood family property in Washington has been there a long time.

An attempt to find out how old the tree is didn’t yield a clear answer, but it did end with an unambiguous declaration that the tree is a state champion.

The 93-foot-tall, 116-inch-circumference China Fir was named the state champion in late July.

The champion tree program — maintained by the Mississippi Forestry Commission — is a part of the National Register of Big Trees, which has existed since 1940 to promote, preserve and educate people about noteworthy trees and the importance of forests in the maintenance of a healthy environment.

“I have a very unusual tree here,” Mac Blackwood said. “It has been in the family for over a hundred years, and the tree itself has been here since the 1800s.”

The tree can be seen in the background of family pictures going back to 1902, when the family bought the farm. The old pictures were part of what piqued the interest in the champion tree program, Blackwood said.

“My grandfather said that in 1910 they would climb the tree, and he said they could see St. Mary Basilica in town,” he said. “Everybody had plantations, agriculture and farms between here and there back then, so it was just rolling hills.

“We remembered the story of my granddad and started checking into it to see how long this thing had been here.”

The crown on Blackwood’s tree was 46 feet, and the tree received a total score of 220 points. It is the first China fir to be placed on the state champion tree list for Mississippi.

When looking at the tree, “it’s obvious it is not a native tree,” Blackwood said.

The China fir, or Cunninghamia lanceolata, is — as its name suggests — a native species of China, as well as Vietnam, Laos and Taiwan. It has needle-like leaves and grows small cones. In Blackwood’s words, it “looks like a sequoia or redwood.”

How the plant came to Mississippi in the first place is still a mystery, but Blackwood said he has a fairly plausible theory.

“This is classified as kind of an ornamental tree, and in the 1820s to 1840s, Jefferson Military College, which is nearby, had agricultural fairs, and they would bring in plant products from around the world,” he said.

“This property was a plantation, and they had some connection with Jefferson Military Academy, and we just assume that at that time they brought it here and planted it.”

At 93 feet, the tree is tall for its kind in this region, Blackwood said, but it “is not nearly the tallest tree in the area.”

Since its planting in the 1800s, the tree has only produced one offspring, a volunteer plant that Blackwood transplanted to another location in 2000. It’s now approximately 30-feet high.

Those who have a tree they think may qualify for the champion tree program can take rough measurements and submit them to the forestry commission’s service forester for the area for verification. The forester will verify the figures and provide a nomination form to forward to the program’s coordinator.

Cathedral lets one slip away, falls to Parklane Academy,…