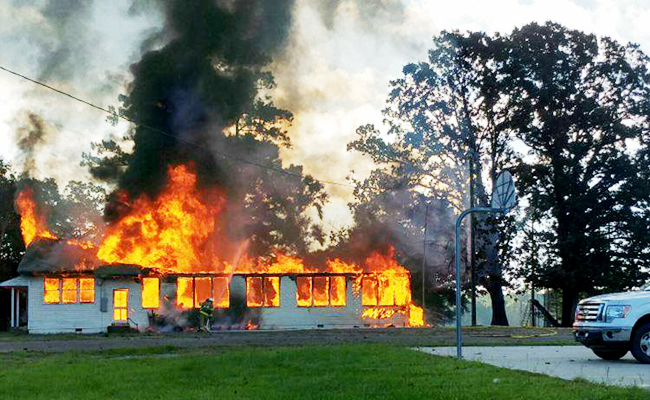 NATCHEZ — Community residents are mourning the loss of the last remaining building of the old Kingston School.

Built in 1951, the building was the cafeteria for the old school and then became a center of life for area residents.

“It was the heartbeat of the community,” District 2 County Supervisor David Carter said. “So many people were educated at the school.”

Firefighters from the Natchez Fire Department and all four Adams County volunteer fire stations responded at 8 a.m. to reports of smoke coming from the building.

Volunteers were on their way to a fire training session downtown when they received the call.

Lake Montrose Assistant Fire Chief Troy Whittington was the first firefighter on the scene and said flames were coming out of the building’s roof when he arrived.

Whittington said that within 20 minutes, 18 firefighters were on the scene.

Carter said the fire likely started shortly after 7 a.m. Carter said no reports of smoke or fire were made when the trash collection station at the site was opened at 7 a.m.

Witnesses driving by on Kingston and Upper Kingston roads shortly after 7 a.m. also reported seeing nothing suspicious on the site, Carter said. Sometime after 7:30 a.m., a Kingston resident called 911 to report smoke coming from the building, he said.

Carter said that on weekends when the building is rented, people might come up on a Saturday morning to decorate and prepare, but that no events were planned for the community center this weekend.

Fire officials on the scene said they did not know the cause of the fire Saturday morning.

Jim Schepers was one of the residents who watched firefighters sift through the debris and put out hot spots from his pickup truck Saturday morning.

“It is a tragedy — one of the last landmarks of the area,” Schepers said.

“My momma went to school here,” he said.

Schepers attended the school from 1945 to 1954. He remembers when the building was built in 1951 to replace a smaller cafeteria on the same spot.

Kingston resident Carol McIlwain also watched firefighters put out the last flames Saturday morning. One of the firefighters on the scene was McIlwain’s son Dusty.

“It was still burning when I went down there,” McIlwain said. “It is just heartbreaking.”

McIlwain also attended Kingston School. Even though she was too young to attend the first grade, McIlwain started school when she was 5 years old.

“My mom was a cook down there,” McIlwain said. “They put me with the first graders because I didn’t have anywhere else to go.”

McIlwain attended the school until it closed in 1958.

McIlwain said the school was first built in 1919. Over time, several buildings were built on the property, including an auditorium and gymnasium that burned down. One year after the school closed, the original school building was dismantled but the cafeteria was left as the area’s community center.

Carter said he and County Administrator Joe Murray recently began, ironically, paperwork to get the building named to the National Register of Historic Places.

McIlwain said many memories are tied to the building.

“Throughout the years, we had weddings, reunions, community fundraisers, get-togethers, entertainment and fellowship,” she said.

Carter said the county did have insurance on the building and will begin to look at what it will take to rebuild the building.

“There is too much history down there to not pass down to our children and our grandchildren,” McIlwain said. “The memories are still down there. We don’t want them to end today.”