FOR Natchez kicks off public phase of fundraising 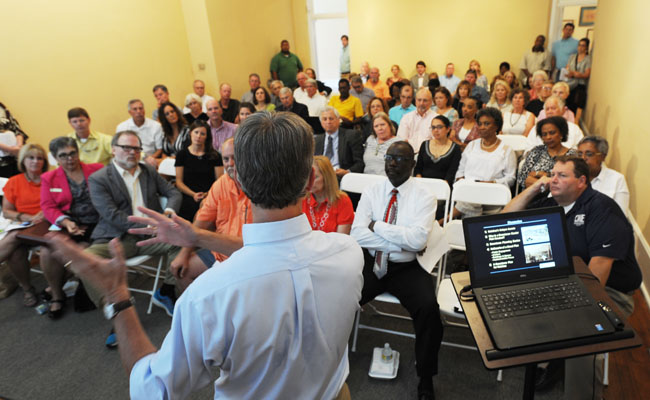 Planner Phillip Walker talks to a group of community leaders and residents during a FOR Natchez presentation. (Ben Hillyer / The Natchez Democrat)

NATCHEZ — FOR Natchez kicked off its public fundraising push Monday to raise $30,000 with a reminder no one has the sole answer to Natchez’s future.

The local non-profit has raised approximately $70,000 of the $100,000 needed to hire the planning firm The Walker Collaborative to develop a strategic plan for the future of downtown Natchez.

FOR Natchez invited a group of community leaders and stakeholders to a luncheon and information session Monday at the Historic Natchez Foundation. The session included a presentation from Phil Walker, the former Natchez city planner who now leads The Walker Collaborative.

Money and political power is not going to save the city, Iles said. Each has its own momentum and serves a very narrow focus, the Natchez author said.

The only solution will involve the entire community.

“(The answer) requires in-depth planning where all segments of the community are represented,” Iles said. “Everybody has a different fix. None of us has the sole answer.”

In his presentation, Walker discussed the reasons why he thinks downtown Natchez needs a strategic plan.

“A downtown plan is a blueprint for future growth,” Walker said. “It answers the questions — Where are we now? Where are we headed? Where do we want to go, and how do we get there?”

Walker said that public engagement is the critical foundation for any plan. During the planning process, community members will be invited to offer their ideas for what they think downtown Natchez needs.

Walker used many of the examples to demonstrate how Natchez could be equally successful in attracting grant money to help fund revitalization projects.

When fundraising is complete, Walker said planning efforts would focus on two downtown anchors — Broadway Street and the Triangle on Martin Luther King Jr. Street between Jefferson and Franklin streets.

Potential objectives for the areas include rehabilitation of historic buildings and planning for compatible development. Possible uses could include the establishment of entertainment districts.

Final objectives would be determined during meetings with community members.

The Natchez aldermen in October signed a non-binding letter of intent saying they would implement the master plan the group develops.

“To me there are opportunities now, and we need to support FOR Natchez and get Phil Walker working on the plan,” he said.

FOR Natchez president Chesney Doyle said after the meeting that getting the community involved — especially the younger generation of the community — is very important.

Doyle said once the group raises the money to hire Walker, getting Walker’s team together to get started should take about six weeks. The planning process should then take six to eight months, Doyle said.

The public is invited to hear about FOR Natchez’s efforts at an 8 a.m. presentation this morning at the Natchez Coffee Company, Doyle said.

Those who are unable to attend, want more information or want to donate can contact Doyle at 404-317-5524 or go to the organization’s website at for-natchez.org.