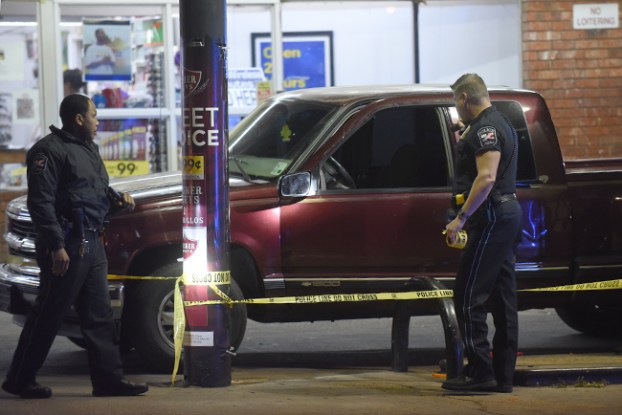 Natchez police and Adams County Sheriff's deputies investigate a truck that was left by a shooting victim at Zipy gas station on Old Washington Road shortly before midnight Saturday in Natchez.

NATCHEZ — A 17-year-old teenager is in a Jackson hospital with life-threatening injuries after he was shot multiple times late Saturday night.

Natchez Police Department Lt. Kenneth Stampley said Sunday evening that the victim was reportedly shot at least twice in the area of Edgin Street and drove a truck to Zipy gas station on Old Washington Road where he hit a gas pump.

Police were called to the gas station shortly before midnight, Stampley said, and the victim was taken to Merit Health Natchez by an individual rather than by ambulance.

The victim was then airlifted to a Jackson hospital, and Stampley said the victim’s father reported Sunday that doctors had been unable to get his blood pressure and heart rate stabilized for surgery.

The victim, Stampley said, suffered a gunshot wound to the right side of his chest and right arm and remained under intensive care Sunday evening.

Stampley said police have been unable to interview the victim and have no details about what exactly happened.

“We have no clue,” he said. “We’re almost at a standstill at the moment until we hopefully get a chance to talk to him,” Stampley said.

Anyone with information about the shooting should contact Crime Stoppers at 601-442-5000.

Test for Natchez tour guides in the works

NATCHEZ — The City of Natchez is looking to establish a test to license tour guides who work in the... read more