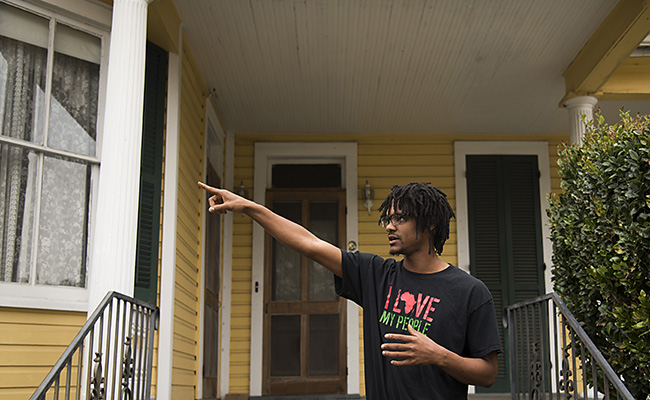 Miss-Lou Heritage Group and Tours owner Jeremy Houston created a new set of tours focused on Black history in Natchez. Tours include the Forks of the Road, Zion Chapel A.M.E. church and other historic sites. (Nicole Hester \ The Natchez Democrat)

NATCHEZ — Every year, thousands of people from around the world come to learn about Natchez’s history, but one native son says tourists have not been getting a complete picture.

Jeremy Houston and his partners began Miss-Lou Heritage Group and Tours in 2016.

“I started Miss-Lou Heritage Group to make sure the other side of Natchez is told,” Houston said. “We are giving people a part of Natchez that has never been given before, has been watered down or has just been plain forgotten.”

The St. Catherine Street Tour travels from the Forks of the Road Slave Market to the Zion Chapel A.M.E. Church, where Hiram Revels, the first African-American to serve in the U.S. Congress, was the minister.

In between, Houston said he takes tourists down “Black Wall Street,” which visits cultural sites and homes of black entrepreneurs.

The Civil Rights tour has five stops and takes tourists to sites important to the 1960s movement.

Topics include the assasination of Wharlest Jackson, an Armstrong Tire and Rubber Plant worker who was killed by a car bomb in 1967 and George Metcalfe, a fellow Armstrong employee who survived a car bomb assassination attempt in 1965.

“Come to Natchez and learn about the other side of the civil rights movement,” Houston said. “Wharlest Jackson and George Metcalfe were not pushovers.”

The Natchez Heritage Tour includes stops at the Forks of the Road Slave Market, the Wharlest Jackson community Garden and the Natchez Museum of African-American History.

Houston said the heritage tour focuses on the influences African Americans have had on Natchez from 1716 to the present.

“It features the amazing accomplishments that have impacted not only Natchez, but Mississippi, the U.S. and the whole world,” Houston said.

The Heritage group also performs reenactments of William Thompson’s story in “Narrative of A Natchez Slave.” Thompson was brought from Virginia to Natchez in 1851 and he ultimately freed himself and ended up in Canada.

Houston said history has been an important subject to him since he was a small child. During Black History Month, he can recall waking up at 5:30 a.m. before he had to catch the bus to go to school so that he could watch television shows about Martin Luther King. Jr., Frederick Douglass, Harriet Tubbman and other black Americans.

Houston said the importance of Natchez’s history really hit home for him when he was abroad in Okinawa, Japan, serving in the U.S. Marine Corps. While Houston was wearing a Natchez shirt, a man approached him and said he knew about Natchez because it is a place where black men owned slaves.

“I wanted to learn as much as I could about the history after that,” Houston said.

Tours are $20 and last anywhere from 45 minutes to an hour. Tickets can be purchased at shopnatchezpilgrimage.com. Tickets for “Narrative of A Natchez Slave,” are $10 each.

For more information, visit the group’s Facebook page or www.misslouheritagegroup.com.