FOR Natchez kicks off effort to develop downtown revitalization plan 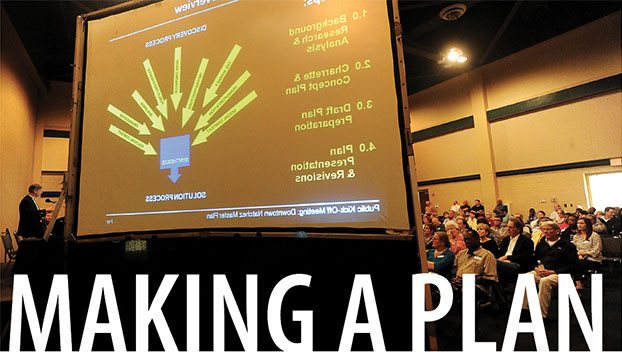 NATCHEZ — The kickoff of the FOR Natchez project aimed at creating a plan to revitalize downtown Natchez was an evening of introductions and initial observations.

Residents and business owners who came to the Natchez Convention Center were introduced to the project team that will research, analyze and ultimately develop a plan for the downtown bluff area and the business district surrounding Martin Luther King Jr. Street where business are traditionally owned by African-American residents.

Walker led the crowd through the steps of the six- to eight- month study project.

Walker and his team were already busy Monday on day one of the project doing background research and analysis, which includes interviewing stake holders and looking at real estate and commercial market analysis data.

The second step of the project, will involve public input during the charette phase of the project Walker said. This phase will begin with a day when members of the public will come together to create their own city plans for downtown.

Community members will be divided into teams and given paper, markers and other materials to develop their plans for Natchez.

“I like to say we are deputizing citizens to be city planners for the night,” Walker s.

The following four days, Walker said the team will take the ideas from the charette and develop a plan that will be presented to the public with a large block of time devoted to a public question-and-answer session.

“Then we will roll up our sleeves and do the detail work to come up with a detailed master plan,” Walker said.

The master plan, which will be available online, will be presented for another round of public input, Walker said.

Walker said one of the most important aspects to the project is ensuring robust public involvement in order for the team to understand the priorities of residents, to ensure that the team hears from everyone involved, to generate ideas and to build plan ownership.

“Because people who take ownership in a plan, will want to see it built,” Walker said.

After introducing the project team and the project steps, Walker and his team offered some of their initial observations, including several challenges that need to be addressed.

Those challenges included a city that is still recovering from recession, a declining population and 30 percent of residents living below the poverty line, economic strategist Gross said.

Vacant downtown buildings, parking availability and a confusing array of one-way streets are some of the urban design challenges of the project, architect Covington pointed out.

Despite the challenges, Covington said the city not only has “good bones” with a dense, walkable downtown area.

“You have the whole skeleton,” Covington said.

After the team’s initial observations, members of the public were given the opportunity to offer what they see as opportunities and challenges for the project.

Residents mentioned a growing arts community, a wealth of recreation and sporting offerings as some of the area’s strengths.

The need for more downtown places to shop and a large number of vacant buildings were mentioned as challenges.

Local storeowner Richard Branyan discussed his concern about the lack of signage to downtown Natchez for people traveling through the town.

Walker and his team will continue to do research and then will return in a few weeks to begin the second phase of the project.