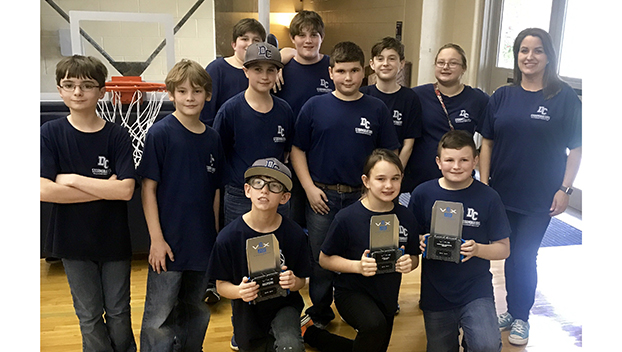 NATCHEZ — With just one year as a robotics team under their belts, the members of Delta Charter’s elementary robotics team is headed to a world championship.

The Storminators won the The Vex IQ State Tournament on March 4 at Holy Cross School in New Orleans and were awarded the STEM Research Project Award, the Teamwork Champion Award and the Excellence Award.

The team now moves onto the World Championship in   Louisville, Ky., which will be March 20 at the Kentucky Exhibition Center and will air on ESPN 2.

Robotics teacher and team coordinator Tara Dale said her students have previously worked with robots in class and at a robotics summer camp that was a part of the Lead the Way program.

Lead the Way is a STEM-based program that uses hands-on learning and STEM principles to get children interested in STEM fields. The program starts in kindergarten and extends into sixth grade.

Dale said her students learned how to use Vex IQ robot kits and ModKit, a simple computer program for controlling the robots.

“I think it’s amazing that we start off in kindergarten with Lead the Way, and for (my students) to be able to take what they’ve learned from that and apply it to building their robot and STEM research,” Dale said. “It makes me feel confident that they’ll keep what they’ve learned with them for a lifetime.”

The Storminators had to tackle four events in order to win The Vex IQ State Tournament — the STEM research project, the competition, the submission of an engineering notebook and an interview.

“For the research project, we all had to pick a subject and come up with a way of presenting it,” Burks said.

The team chose the topic of how robotics can help children with autism by teaching them social development skills.

The competition involved teams of two facing off against each other’s creations in a small rectangular arena. Within the perimeter, the teams earned points by balancing or parking their robots on a bridge by itself or with others.

Points were also earned if objects called hexballs could be knocked to the other team’s side, or put on top of towers at the far ends of the perimeter. Teams had a time limit of one minute. After 30 seconds, teams had to switch drivers.

An engineering notebook contained plans that modeled the robots and was how the students showed their work to the judges.

The final process was the interview.

“We were asked how we built the robots and how we innovated them,” Roberson said.

Dale said the main focuses of the  events were for the judges to mark teamwork  and problem-solving skills.

As the world championship approaches, the Storminators are looking forward to the event with a shared realism.

“I don’t want to overshoot it and say we’ll win, but I’d like to get into at least the top 100,” Thompson said.

The Vex Worlds competition will bring together the top 1,400 student-led robotics teams from around the world to compete April 19-25.

Dale said the school is looking for sponsors so the students will have an opportunity to attend the competitions.