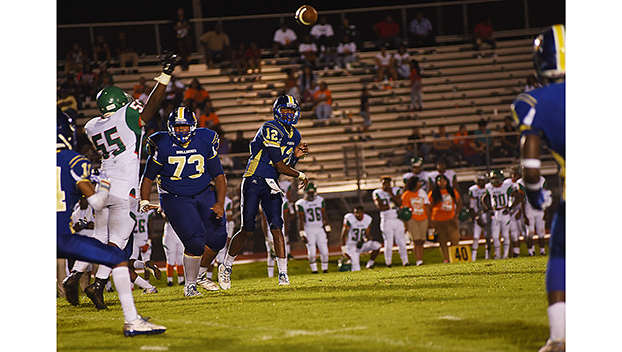 Natchez High School quarterback Chris Scott is not one to rest on his laurels.

The rising senior has spent the offseason constantly pushing himself through several different workouts in best preparing himself for whatever lies ahead.

The next step for the University of Louisiana at Lafayette commit is the 2017 Nike Opening Regionals Sunday in New Orleans.

The New Orleans camp is one of 13 different regional sites spread across the country, where players compete to earn one of the 166 invitations handed out to participate in The Opening Finals this summer in Oregon.

“That would mean the world to me; that’s my dream,” Scott said. “To be able to compete with the best … I’m trying to make the best of this opportunity.  I’ve always watched (The Opening Finals). Even the old episodes, I still watch them trying to see what I can do to prepare myself and hopefully get the invite.”

The camp setting will feature instruction from position-specific coaches in an effort to improve each camper’s abilities.

“I’m really looking forward to it,” Scott said. “It’s going to be my last shot to make it to Oregon, and I’m going to do my best.”

Recently, Scott has leaned on the guidance from former Natchez star and current Troy University standout wide receiver Sidney Davis as well as other area college players in preparation for the upcoming camp and season.

Scott said working with college-level athletes has perhaps best prepared him to adjust to the speed and caliber of athletes he will be throwing to come Sunday.

“I honestly think if I have my timing down, it’s going to come easy for me,” Scott said. “Sidney and all the college guy receivers (I’ve been throwing to) are probably a little bit faster than what I’m used to … I’m going to throw it far and hard, and I’ll be OK.”

The New Orleans camp is just the latest in a series of eventful trips for the Bulldogs signal-caller.

Scott, who holds scholarship offers from the University of Southern Mississippi and Jackson State, visited Mississippi State and Ole Miss in the month of February and plans to visit USM and ULL in early April.

The 6-foot-3, 190 pounder committed to the Ragin’ Cajuns in October and is currently rated as a three-star prospect by recruiting service 247Sports.

“I’ve been talking to ULL since the ninth grade,” Scott said. “It’s been an ongoing relationship with them. They seem to be a pretty good family staff. They’re straightforward, and I get the feeling when I go down there that this is where I want to be.”