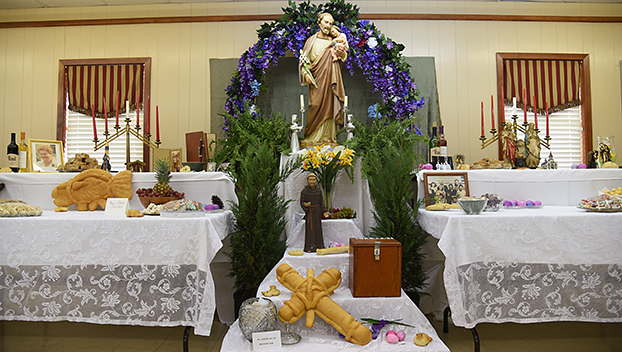 NATCHEZ — Last weekend, parishioners with Assumption Catholic Church carried on a 15th century tradition the church has celebrated for the past 12 years — St. Jospeh’s Feast Day.

A statue of St. Joseph, patron saint of families and workers, stood prominently on a tall podium inside a hall at the church.The statue, as well as tables of food and items placed on either side, were laid out in honor of St. Joseph’s Feast Day.

The tradition began in Sicily during the 15th century during a severe famine. One of the few foods people had to eat were fava beans.

They decided to invoke a novena — a prayer with an intention — to St. Joseph to bring rain. Rain came, and the people attributed this to St. Joseph. They said they would have a meatless feast every year.

Visiting parishioner Leona Adams said that favors written on the petitions make requests for jobs or a family member’s health.

“The altar is a thanksgiving to St. Joseph for his help to families and workers. The whole point is to say thank you and ask for favor upon you,” Adams said.

No one reads the petitions. The acting reverend puts a blessing on the food and then the attendees talk about their personal experiences.

Adams lent a hand in preparing for the feast day at St. Mary Minor Basilica. She said that she’s helping for the sake of the celebration.

Items found on altars for St. Joseph include hammers and saws because St. Joseph was a carpenter. Traditional foods including fig cookies and lemons, seed cookies.

Adams said no meat is served at the feast because of the feast’s origins.

Traditions now involve erecting altars in houses or at churches and creating gatherings about them.

“St. Joseph was Jesus’ father. He’s who you pray to in the Catholic faith when your trying to find a job or are praying for a family member,” Adams said.

Assumption Catholic Church has been observing the feast day for the last 12 years.

The Altar Society in Honor of St. Joseph is mainly in charge of putting the novena together, parisioners from Natchez and other churches come together to create the feast day.

Parishioner and New Orleans native Sharon Mier has been involved in altar society work since she was a young girl.

“I’ve always been involved,” she said. “When I was younger, my mother always took me to St. Joseph’s Altar. I kind of started it here, trying to get them to start the tradition. I did it by showing the altar society of pictures from back home, and that convinced them to start it.”