Wrangling the river: Local historian writes about past, future efforts to control river 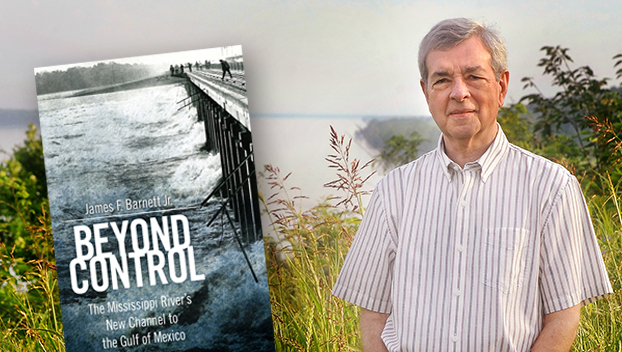 Local historian and author Jim Barnett, above, has written a book above the history of the country’s efforts to control the Mississippi River. Barnett will talk about his book at a book release Thursday at the Natchez campus of Copiah-Lincoln Community College. (Ben Hillyer / The Natchez Democrat)

NATCHEZ — Natchez historian and author Jim Barnett has spent decades studying the Native Americans who settled along the banks of Mississippi River. His latest book tells the history of the river that was the life force for the region and its inhabitants.

With a background in Native Americans and archaeology, Barnett studied how ancient peoples lived by the river. He first became curious about the modern manipulation of the River while researching the tribes that foraged along its banks.

His new book titled, “Beyond Control: The Mississippi River’s New Channel to the Gulf of Mexico,” addresses the struggle to control the Mighty Mississippi from settlement to now.

“It’s not a book solely about the past, it’s about now and the future,” Barnett said. “Our forbearers got here 300 years ago and began to establish farms and build cities and then try to protect those properties with levees…Now, we want the river to stay where it is.”

But Barnett said the river’s change of course is inevitable.

Barnett said 500 years ago, the Mississippi River began distributing part of its flow down the Atchafalaya River, now designated as “Old River,” an area approximately 40 miles south of Natchez where engineers maintain the fight against the river currents.

Barnett said there are lot of so-called old rivers around the Mississippi River, but this area is where the U.S. Corps of Engineers built their structures of concrete and steel to control the river.

Efforts to alter the course at Old River begin in the early 19th century.

“That sort of upset the equilibrium,” Barnett said. “Over time, that portion going into the Atchafalaya began to increase.”

Barnett said an increase in river flow to Morgan City instead of New Orleans  would be disastrous to the local environment, commerce and population.

Towns, farms and cities down the Atchafalaya River basin would succumb to a major flood.

Barnett said it would be compared to the 1927 flood, one of the worst tragedies to ever hit the area.

Known as The Great Mississippi Flood of 1927, it was the most destructive flood in America at the time. It flooded  parts of Arkansas, Mississippi and Louisiana, but mostly in the Mississippi Delta.

Barnett said the levees along the western side of the Mississippi river broke and sent at least half of that flood into the Atchafalaya basin.

“It was a disaster…hundreds of people lost their lives,” Barnett said.

Barnett said if the Mississippi River were to ever change course in spite of the Corps of Engineers efforts, the effects would be worse than those seen in 1927.

The state of Louisiana produces the second largest amount of oil in the United States. Additionally, 50 percent of the nation’s oil and gas refineries are in the state, as well.

“All of that infrastructure would be wiped out if a major river came down it…(they) are not really reinforced to handle that kind of a change in the flow,” Barnett said.

Barnett said even without the possibility of this course change, New Orleans is already in a precarious position.

The flow of the river is what keeps the salt water out. If the salt water were to encroach further up river, it would enter the public water supply and corrode the pipes and machinery into the city.

“You couldn’t drink it and it would eat away the entire system,” Barnett said.

If the city shut the system off from taking in the water, there would be no water for sanitation, fire suppression and no water to drink.

Barnett said there are solutions to the threats, but taxpayers would pay a heavy toll.

Not long after the 1973 flood, which nearly changed the course of the river, professors from Louisiana State University took it upon themselves to research a solution for a worst-case-scenario.

Barnett said he details in his book one option for New Orleans, which is to find an alternative source of fresh water in the Pearl River in Mississippi, nearly 35 miles north of the city.

Barnett said it could be used in tandem with fresh water aquifers within reach of New Orleans, which are located near Lake Pontchartrain.

Barnett said it would be expensive and it would be difficult, but once the water source was established a damaged system would be less of a threat to New Orleans.

Barnett said even though the threat still exists, politicians are hesitant to spend a tremendous amount of money and risk their political careers to prepare for something that may never happen, especially when people continue to think the river will remain where it is today.

“It’s unrealistic for us to expect the Mississippi River will never change its course,” Barnett said. “Throughout its long history it (has) always meandered.”

Copiah-Lincoln Community College and the Carolyn Vance Smith Natchez Literary Research Center will host A book release for Jim Barnett’s “Beyond Control: The Mississippi River’s New Channel to the Gulf of Mexico” from 5:30 to 7:30 p.m. Thursday in the Willie Mae Dunn Library. Barnett will present a presentation about book beginning at 6 p.m.