Tree takes out most of Washington Street house during storm 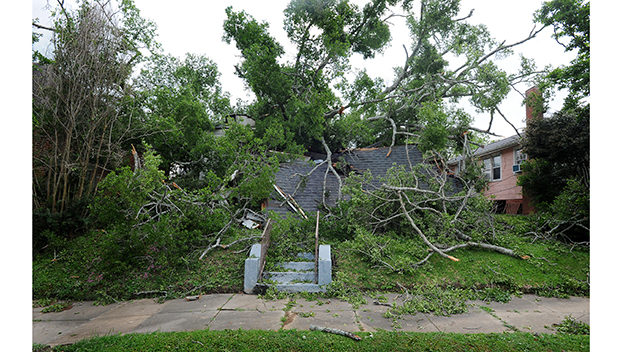 NATCHEZ — Maggie Brown had been worried about the tree in her backyard.

The Washington Street resident had already arranged for the large tree to be trimmed on Monday.

Unfortunately, Monday was one day too late when Sunday’s severe weather caused the large oak tree to crash into her house, tearing open the roof and crushing all but the back room of the residence.

A nurse at Riverland Medical Center in Ferriday, Brown was not home when the tree fell.

Driving up to the house she had been renting for five years, Brown saw nothing but limbs protruding from the area that was her front porch and living room.

“Working nights is a blessing after all,” Brown said.

Soon after Washington Street residents were busy helping Brown, who is also well known as a singer in the region, rescue whatever she could from the debris — including all of her favorite guitars.

“So many friends and neighbors showed up to help,” Brown said.

A neighbor who heard about her situation offered to temporarily rent her a furnished house, which happened to be next door.

“Everybody has been so sweet,” Brown said. “I live in the best neighborhood, no doubt about that.”