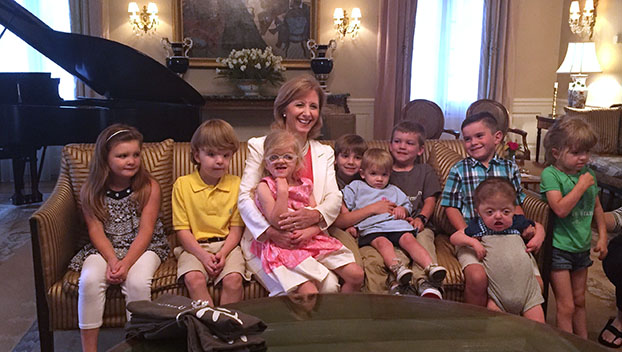 Submitted photo First Lady Donna Edwards, center, holds Ellis Malone in her lap and is surrounded by other children born with Apert Syndrome. The children recently visited the capital when June was officialy declared Apert month in the state. (submitted)

Though she was mostly concerned about asking the governor where the ice cream could be found at the capitol, Ellis, her family and a handful of other families from across the state recently made a trip to Baton Rouge for a much bigger purpose.

June is Apert Syndrome Awareness Month, and Ellis’s mother, Heather, recently went to the board of the Ellis Malone Foundation, a nonprofit her family created to raise awareness of Apert and help families, with the idea of trying to get the state of Louisiana to official recognize Apert month.

“I took it to the foundation board, and they just took and ran with it,” Heather said. “One of the board members knows the governor’s family well, so they went to work on it.”

“And they just took it and ran with it, too,” Heather said.

The foundation then contacted families with children with Apert syndrome across Louisiana, and four families including the Malones made a trip to Baton Rouge to see the governor last week.

The families first went to the governor’s mansion where they were treated to a tour and a visitor from Louisiana First Lady Donna Edwards, who posted a photograph of herself and the children during the visit on Facebook.

“She came out and joined us and spoke with all of the families, and we got to the chance to talk to her about Apert Syndrome,” Heather said. “She talked to all the families and talked to the families about understanding what it takes to raise a child with special needs and thanked the parents for their efforts to make these children’s lives as happy as they can be.”

From there, the families visited the capitol where they met with a chaplain who prayed with them.

Next, the families met Gov. Edwards in the pressroom, where he read a proclamation declaring June Apert Syndrome Awareness Month in Louisiana.

“He stayed for much longer than I thought he would and listened to all of the stories of the families and the things they’ve gone through,” Heather said.

Ellis got a special souvenir from the governor — the pen with which he signed the proclamation.

“He gave the pen to Ellis, and she immediately put it into her mouth,” Heather said, laughing.

The families then toured the fourth floor of the capitol before being called to the floor of the House, where Anders read a resolution for Apert Awareness Month.

While waiting to be called to floor of the Senate, where Reiser would also read a resolution for Apert Awareness Month, the children visited LSU AgCenter booths set up at the booth where ice cream was being handed out.

Heather posted to Facebook a photograph of Ellis asking the governor where the capitol’s ice cream could be found.

“Just so everyone knows, she did get her ice cream,” Heather said.

Ice cream at the capitol, special souvenirs, conversations with state leaders, it’s all in an effort to shine a light on Apert syndrome and educate others on the effects of the condition and — most importantly — that those living with Apert syndrome are not that much different from everyone else, Heather said.

“When we had Ellis, nobody at the hospital had any idea what it was,” Heather said. “They just knew, of course, that there were abnormalities. So one of things we want to do is raise awareness in general about the syndrome for medical professionals and families affected by Apert syndrome, so there can be understanding that life expectancy is normal, and yes, there are a lot of medical issues, but you can overcome them, and these children can become thriving adults.”

“We want people to know that just because they look different … doesn’t mean their personalities are different or that they’re really any different from anyone else. … We know everybody is curious, and we are open to answering questions, and we are teaching Ellis to answer those same questions.”

Heather said many times children may ask be admonished by parents if they ask about Ellis’s appearance.

“Instead of saying, ‘Well, she was born like that,’ or ‘Let’s ask her parents,’ they’re embarrassed and will say, ‘Don’t say that.’ Then, their children think, ‘Oh, I’m not supposed to talk to anyone who looks different.’

Heather said she hopes raising awareness about Apert syndrome will also help families of those living with Apert to receive the help many of them need.

Because children with Apert syndrome require multiple surgeries during their developmental years to manually grow their skulls, the condition can be extraordinarily costly for families, Heather said.

“We want people to understand that not only for Apert, but for any medically needy family, help them,” she said. “It is burdensome on their families. You never want to have to think about that. You want to just think about can I make my children thrive, not how am I going to pay my bills?”