MDOC: Escaped inmate still on run, may have left area 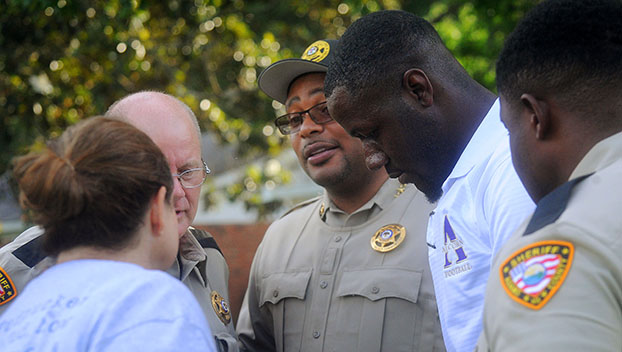 Adams County Sheriff Travis Patten, center, and deputies from his office talk to residents who live on Woodville Drive Thursday night after a suspicious person was spotted falling into the bayou behind their houses. The person is believed to have been an escaped inmate from Hattiesburg. (File photo)

NATCHEZ — An escaped state inmate who was spotted in Natchez Thursday afternoon was still on the run from law enforcement Friday.

MDOC Communications Director Grace Simmons Fisher said Friday afternoon that MDOC was still searching for Anthony Boyd Lamar, 56, who escaped Wednesday while on a work detail at Tatum Park in Hattiesburg. He began serving a 16-year sentence in August 2016 for a residential burglary conviction in Copiah County.

Adams County Sheriff Travis Patten led a search for Lamar Thursday evening and into the night after Lamar was spotted on Woodville Drive in Natchez.

Patten called off the search at 11 p.m. Thursday and said Friday afternoon that authorities do not believe Lamar is still in the area.

Woodville Drive resident Melanie Smith reported Lamar’s whereabouts to police when she discovered him near St. Catherine Creek behind her house at approximately 3 p.m. Thursday.

Smith said her dog alerted her that someone was behind the house.

“We have a pretty big dog, and she became very ferocious and ran to the fence,” Smith said. “I couldn’t see what was going on, and once I got up to go look, that’s when I saw the individual begin falling down to the creek.”

Smith said she was afraid the person might have been her neighbor’s grandson and went to the edge of the creek to check on them.

Smith said she called for the person to make sure they were OK, and no one responded.

Lamar popped up, Smith said, from a hole in the kudzu, and she asked him if he was injured and then why he was on her property.

“He said that he had been on a four-wheeler and had put it in on Lower Woodville Road, and he and another person were going to get help,” she said. “By that time, I knew he was an inmate because I could see his uniform. I wasn’t shocked, like most people would have been, I guess. I worked in law enforcement for years, so it didn’t stun me.”

Smith quickly returned to her house to get her phone to call 911 and was gone approximately two to three minutes when she returned and Lamar was gone.

Smith said she waited for law enforcement officers to respond to the area, but no one showed up. After some time, her husband called 911 again and was told officers had already been to the area to investigate.

Smith would later learn, she said, that the officers apparently had been dispatched mistakenly to Lower Woodville Road instead of Woodville Drive. Natchez police officers came to Smith’s house Friday morning to follow up on the situation.

“Everybody was really courteous,” she said.

“He was there in five minutes and led the search,” Smith said. “He was the first one in the creek. We certainly do appreciate how quickly he responded, and his whole team worked very diligently.”

Patten called in deputies and Natchez police officers were dispatched to help search for Lamar, who was believed to be in the area of Plantation Manor apartments on Highland Boulevard and Delta Rentals on U.S. 61 South.

Deputies and police officers tracked Lamar — using a K9 dog and drones. Delta Rentals offered its equipment to the search efforts, and a tractor was used to mow kudzu to increase visibility.

Law enforcement personnel searched the bayou for a couple of hours, then expanded the hunt to search St. Catherine Creek by boat with assistance from the Mississippi Department of Wildlife, Fisheries and Parks.

Lamar is from Crystal Springs, Patten said, and ACSO is not aware of any connections he has to Adams County. Patten said he also does not know how Lamar made it from Hattiesburg to Natchez.

Patten said he is thankful for the vigilance of residents such as Smith.

“It takes a community-wide effort in combating crime, and they did a great job on (Thursday) with their information sharing,” he said. “If you see something, say something, and the citizens did that very well on (Thursday).”

Anyone with information about Lamar’s whereabouts can contact local law enforcement or MDOC at 662-745-6611.