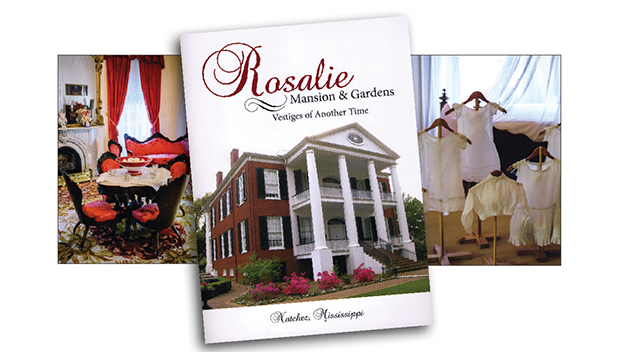 The Mississippi State Society of the Daughters of the American Revolution have published a new book that tells the story of Rosalie mansion in text and illustrations. The book includes detailed photographs, at top, of the interior of the house and many of the furnishings and artifacts in the mansion.

NATCHEZ — “Rosalie Mansion & Gardens: Vestiges of Another Time” is a newly printed, full-color publication that tells the history of one of Natchez’s most famous national historic landmarks.

It also tells of the people who have loved it for nearly 200 years.

The book is a result of new research and new photographs requested by Cynthia Cleveland McNamara of Jackson, regent of the Mississippi State Society Daughters of the American Revolution.

“The book is in response to visitors’ requests for a book,” she said. “They want it and expect it.”

The book is part of McNamara’s state regent project, “Guiding Rosalie’s Path to the Future.”

The DAR is a patriotic organization that owns Rosalie.

She is also co-author of “Rosalie: A Mansion of Natchez,” a book first published in 1978 and now out of print.

“Our goal was to tell the history of Rosalie and its furnishings and give details about the people who lived there for decades and those who have supported the mansion since the DAR bought it,” Wood said.

The mansion’s story begins with wealthy lumberman and cotton planter Peter Little, who built the house in the early 1820s on a site with a breathtaking view of the Mississippi River. Hand-carved furnishings were imported. An adjacent 20-acre garden was established.

Happiness arrived with Little’s marriage to Eliza Lowe. But sadness soon followed. Though they reared a niece, the couple had no children of their own.

After Little’s death in 1856, the house was sold to another couple who also had no children, Elizabeth and Andrew Wilson.

They reared two orphaned friends of the family at Rosalie, young Theodore Wensel and Fannie McMurtry.

Within a few years, America’s Civil War turned their lives upside down. Rosalie was Union headquarters in Natchez.

After the war, Fannie McMurtry married a successful Natchez businessman, Stephen Rumble, with whom she had six children. They lived at Rosalie and were financially comfortable at first.

But numerous deaths, the destructive cotton boll weevil, unsolved theft, the Great Depression of the 1920s and major floods took their toll.

The MSSDAR bought the property, inviting the sisters to live there for the rest of their lives. Repairs and improvements began.

Many of the decorative arts enhancing the Federal style mansion from the 1800s remain in place today, including complete John Henry Belter furniture sets, oil paintings by Fannie McMurtry Rumble and handmade clothing worn by the Rumble children.

Photographs of these collections and others are included in the new book.

“Maintenance and improvements are continual at Rosalie,” McNamara said. “To keep up a 10,000-square-foot house takes lots of money. Sales of the new book will be put to good use.”