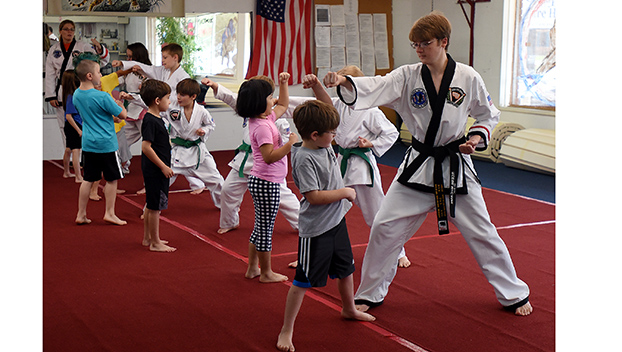 NATCHEZ — Martial arts is a sport known for its rigor and discipline, which can make it difficult for some young students.

High school sophomore Reese McCann has not only proven his abilities in his time at Moo Sul Kwan Karate Studio, but also his patience and perseverance.

A first-degree black belt, McCann has been practicing karate for eight years and is an assistant instructor at the Natchez studio.

Reese’s mother, Laura McCann, said her son’s accomplishments in karate have helped him to have confidence and courage.

“Everybody’s got their weaknesses, one of his is that he’s a little tight jointed … but he offsets that because he’s quick and smart, and he works with people really well,” Rogers said. “His strength is in his ability to motivate other people, and he’s so persistent, he just doesn’t give up.”

McCann said the very first belt is a student’s first big accomplishment, with green belt being the immediate rank and purple belt being the first advanced belt.

“When I tested to get my black belt, it was an intense three-hour work out and basically a review of everything I had learned, which was seven and a half years-worth of stuff,” McCann said.

McCann said he began karate in second grade at the request of his older brother, Chandler, who eventually opted out at green belt.

McCann stayed in, coming to love sparring and karate in general, so much so that he dropped out of every other sport in order to focus on karate.

Besides learning discipline and how to stay in shape, McCann has also had the privilege to teach other, younger students for the last three years.

“It’s difficult controlling the class because it can get a bit hectic,” McCann said. “Teaching the green and purple belts in the group is easier than teaching the little kids, since they’ve been here longer.”

For now, McCann is focused on competing in his first karate tournament soon.

“Master Rogers has an entire rack of trophies, so if he can do it, so can I,” McCann said.